Ken and I were unable to attend the taping in DC last night due to prior engagements, but we just got the recap from our friends at MoKi Media. Episode airs March 24th.

NFL players Devin Thomas, wide receiver for the Washington Redskins, and Bret Lockett, defensive back for the New England Patriots, joined celebrity host Charlotte Burley for Episode 5 of Season 3's "The Turn On," her talk show about love, sex and relationships. Topics ranged from turn ons in the bedroom such as lingerie or not - Lockett prefers the "wait and see" of lingerie, Thomas doesn't, both prefer goal oriented women with a natural look - to aggressiveness - Thomas doesn't mind being approached by women, Lockett likes to do the approaching. Both men agree with Charlotte's first guest, George Worrell, DC-based event and personal stylist, that beauty comes from within.

But when Burley asked what would happen if the Redskins played the Patriots, Lockett quickly responded, "No competition." Thomas had an opportunity for a comeback when Lockett kept his promise to Burley to take his shirt off as things heated up on set. When Thomas was asked to do the same, he looked at Locket and said, "No competition!"

As for a more detailed recap regarding girls:

Devin likes naked bodies - he likes natural beauty with no make-up... he is a family man with a good foundation. He wants someone who works hard and doesn't like gold diggers. He likes a woman who knows what she wants and he is honored when woman approach him... but he doesn't like it when girls throw themselves at him.

Also, Charlotte has something called a "hot box" where she pulls out sexy items to get conversations flowing, i.e. lingerie, a book, etc.

The first thing Devin pulled from the box was lingerie from Victoria Secret. the first thing that came to his mind was: "coming home from a hard day at practice and walking in and his woman wearing the lingerie."

The first thing that came to Bret's mind when he saw the lingerie was Valentine's Day and how he didn't have a valentine this year... AWWW!!

Man...without Vinny Cerrato driving the Redskins organization into the ground, I gotta find new outlets for posts. Is it draft day yet? 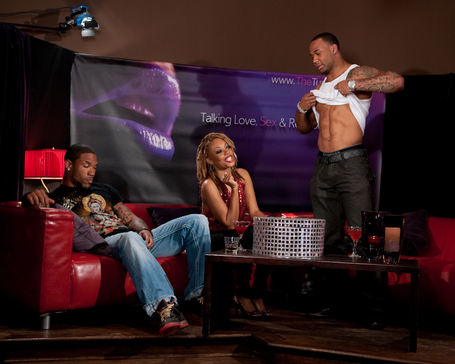