Redskins Draft Prospect: Running Back At the Top of the 2nd Round?

Share All sharing options for: Redskins Draft Prospect: Running Back At the Top of the 2nd Round?

I am not alone in my suspicion that the Redskins Brain Trust will look to bring in a running back at the top of the second round. The lack of what would be our high 3rd round choice (used in last year's supplemental draft to take Jeremy Jarmon, which I loved) means if we want a starting caliber (stud) back out of this draft, our best opportunity is going to be at the top of the 2nd round. Here are three guys who many suspect are bottom of the first round or top of the second round picks. Which one would you rather have? 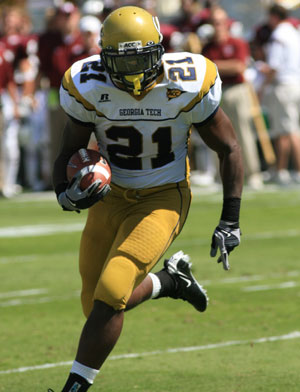 Dwyer finished his 2009 collegiate campaign with 1,395 yards and 14 touchdowns on 295 carries. Those of you who are native Marylanders know and appreciate Paul Johnson's spread option offense. Navy ran it effectively while amassing huge rushing totals against their opponents. When Coach Johnson went to Georgia Tech, he installed this attack and Dwyer became a force in the ACC. His yards per carry trailed off a little (especially from his freshman year when he and Tashard Choice teamed up prior to Coach Johnson's arrival), but the ACC also caught up a little to what Yellow Jackets were doing. (more Dwyer after the jump)

Ed Thompson from Foxsports.com recently interviewed Dwyer and asked him about the physical nature of his play. Dwyer's repsonse:

"Instead of you taking hits, you've got to be able to put a hit on them as well, make sure they know you can hit them, and not just take it."

Dwyer came into his junior season on the heels of being named the ACC Player of the Year and the number one leading rusher in the conference. By all accounts, he is considered one of the top three or four backs in the upcoming draft, but due to a quieter junior season and not exactly mind-blowing performances so far this offseason, he has slipped to bottom of the first round/top of the second round range. 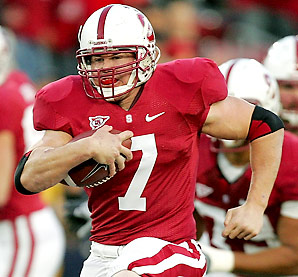 What is not to like about this guy? He put Stanford on his back most weeks this past year and ran over his opponents en route to building a very Sportscenter-worthy senior season. While many look at him as a pure power back, his combine time in the 40 was 4.53 - not in C.J. Spiller or Jahvid Best territory, but he really helped himself out. It is worth noting that Spiller and Best can neither deliver nor withstand the kind of pounding Gerhart can.

The 40 time was huge for Gerhart. He knew that if he couldn't break 4.6 he would most likely be slotted as a fullback, which would lower his draft status as well as his potential paycheck. Beanie Wells ran a 4.59 in the 40 and was taken in the bottom of the first round last year. Add his speed to his impressive performances in the bench press and vertical leap, and NFL teams probably won't let this athlete get much past where the Redskins pick in the 2nd round. (cough, cough, Riggins....cough) 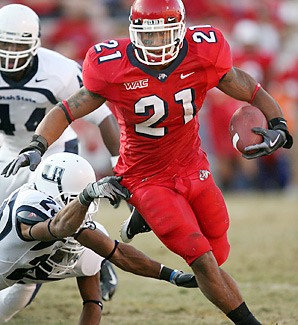 This guy exploded last year onto the scene with an 1,808 yard, 19 touchdown junior season. He was injured during his sophomore year, or I suspect we would all know way more about him. At just under 6' feet tall, he brings 220 lbs of bulk to bear on his would-be tacklers. He has pretty decent hands and above average speed (he has posted a 4.49 40 before, but at the NFL Combine he ran a 4.53.) Mathews is the kind of play-making athlete NFL teams like to feature out of the backfield. He has his share of detractors though...I have read in a number of places that he is not a great pass blocker and lacks aggressiveness running inside. My guess is that his athletic ability will cause him to go in the 2nd or 3rd round, putting him squarely in Mike Shanahan's radar. 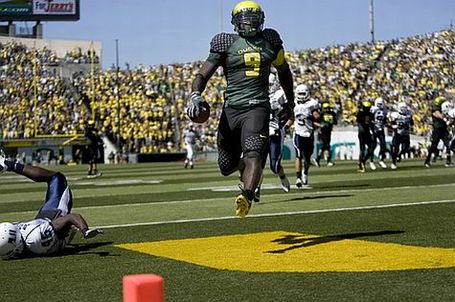 I might find myself rather alone on this one, but I kind of like this player and think he would be a good pickup at some point in the draft. (I realize that the top of the 2nd round would be a big stretch for this guy.) Think back to the opening of the college football season and that Boise State vs. Oregon game. LeGarrette Blount was considered one of the top players in all of college football, and a surefire top draft pick. When he allowed his emotions to get the better of him (on national TV), he was rightfully downgraded. I imagine it was an extremely hard year to live through if your name was Legarrette Blount. I imagine almost nobody felt a ton of sympathy for the guy. Fast forward to the here and now. The guy has done everything people have asked of him. Rehabbing the kind of image problem that stems from punching an opponent in the face is not easy. His 82 yards and 2 touchdowns in his senior year make it hard for NFL GM's to judge him. But he ran hard at the Senior Bowl, and he is a big, bruising back with a ton of upside. If we wait until later in the draft to get a bruiser, Blount would be a guy I would be happy to get.