When I was offered the chance to speak with Kenny Mayne - of ESPN fame- I of course said yes. I was a little concerned that I would trot out the questions he must face constantly but I did my best. His current interview circuit is of course a means of drawing attention to his hit online series, Mayne Street. Click over and check out what he is up to if you haven't already. Check out my interview with Kenny after the jump. 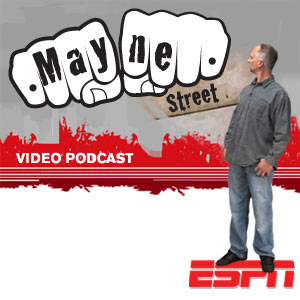 HH: Hope I got that one right...I would hate to have researched the wrong town.

HH: Great...well since in your bio you seem to be all about the game shows, I figured I would grill you on some Kent trivia. I was trying to think of some questions that most people might not ask you in your current whirlwind of promoting Mayne Street.

Kenny: Uh-oh...you know it's funny you say that. When I schedule a go-round of these interviews, I am invariably asked about game shows...One in particular, The Power of One, I always get credited with doing. And I did not do it.

HH: Yeah, in fact, I read you handed that over to Drew Carey.

Kenny: I wonder how he feels about that. One I did do though...I was up for the syndicated version of Who Wants To Be a Millionaire. They ended up going with Meredith Veira.

HH: I guess you couldn't pull in the 50-70 year old at-home female demographic they were after like Meredith could.

Kenny: You know, they basically told me as much.

HH: OK, first up...Kent is the second largest city in south King County. Can you name the largest?

[He ventured a guess I couldn't make out, but I did not know the answer either, which is the biggest sin of a game show announcer ever, so I moved on quickly.]

HH: Kent is the home of REI, which, based on its proximity to D.C. explains why I paid over $100 for a pair of REI ski pants recently.

Kenny: That sounds about right.

HH: Seriously, how much do they cost in Kent?

Kenny: They give them away.

HH: Alright, last Kent question. During and after the Great Depression, Kent became known as "The ‘blank' Capital of the World".

HH: Is that your final answer? Just kidding...We were looking for "Lettuce". The Lettuce Capital of the World. Did you know that?

Kenny: I did not.

HH: Maybe there is a Lettuce festival or parade and you can be the Lettuce King!

Kenny: Well, we mostly all act like we are from Seattle there anyway.

HH: It says here you were an Honorable Mention Junior College All-American QB, for Wenatchee Valley Community College. Do you remember any of the guys you finished behind...anyone of note?

Kenny: Hmmmm...I can't. You know, what that basically means is that I walked on and then quickly walked off at the University of Washington.

HH: Well, looks like you did alright. At UNLV, you were listed ahead of Randall Cunningham on the depth chart.

Kenny: Yeah, that is the other thing people bring up a lot. Thing is, he was a freshman and I was a senior. I would not have otherwise been named ahead of him on any list.

HH: Yeah, I was wondering if maybe you were going by your maiden name or something, and managed to slip by him alphabetically maybe.

Kenny: (laughing) Well, Sam King was our starter, then me, then Allyn Reynolds, and then Randall. It is one of the things I am most proud of in my life.

HH: Seems you have plenty going on. In fact, one of the things I remain most impressed by-aside from you hailing from The Lettuce Capital of the World-is your ability to coin a great home run phrase. I was hoping to play a quick impromptu game with you. I have cued up some Redskins-related scenes that I was hoping you could add one of your home run calls to for all of our readers.

HH: A recurring scene for us Redskins fans this season was Albert Haynesworth gasping for breath on his knees between plays. What do you got?

[You know, even if the joke is old, when Kenny Mayne says it, you laugh.]

HH: Jason Campbell getting peeled off the ground after yet another sack.

Kenny: "Even with derogatory credit, you can own a brand new car."

HH: Imagine Mike Shanahan's famous facial expressions on the sidelines if he was the coach when Suisham missed the 23-yarder to beat the previously unbeaten Saints.

HH: The Super Bowl this year is in Dallas, and we of course hate Dallas here in D.C. So as the Redskins are hoisting the Vince Lombardi Trophy at the 50 yard line, right above the blue star at Jerry Jones' stadium...

Kenny: " I AM GOLTHAR THE TERRIBLE, WHAT HAVE I TO FEAR FROM ROME!"

Kenny: You know, I thought you might want to talk about my buddy Jim Zorn. I came to know him in Seattle and certainly thought highly of him. He would be the first to admit he did not do that well but to see the way it was handled was just horrible to watch. What was left for him to do at the end there besides schedule meetings? You know, some guys are better off as position-type coaches and some guys are made to be head coaches, but it sure was tough for him to go to a place where the owner is always on the button. I have been traveling for a few weeks now...where did he end up going?

HH: Baltimore. He went up the street to look after Joe Flacco. I think he even had more than one choice.

Kenny: He was a fun player to watch and a good guy to get to know.

HH: Kenny, I really appreciate your time and wish you the best of luck with your current season of Mayne Street. We'll be sure to let everyone know how to check it out.

Kenny: Thanks. You too. Take care.