The first flakes of this snowstorm are falling, and I am already tired of talking about this snowstorm. So I am pulling out one of the bigger guns in this debate. We have established the quarterbacks, cornerbacks, offensive linemen and punter. Today we put someone behind that O-line.

We love our running backs in this town. And we have had a few very good ones over the last decade. This position speaks to the "continuity" that this team has had in certain places over the last 10 years. Stephen Davis was the starter from 1999-2002, Trung Canidate won the job in 2003, and Clinton Portis has been the #1 guy ever since. These, of course, are the opening day starters - other guys have started games in that time period. Before we figure out who to hand the rock to, let's see where we stand - 17 roster spots have been handed out. (up-to-date All-Decade roster and RB discussion after the jump)

Note: I am extremely pleased that Ray Brown beat out Cory Raymer in the recent vote. There is simply no denying Ethan Albright's right to be on this team. When we get to the end, we can decide if Cory Raymer should be added as a 9th OL, or if we need to beef up the team at another position. 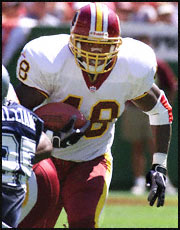 I get the easy job of putting Stephen Davis and Clinton Portis on this team. Coming out of Auburn, Stephen Davis was a 4th round draft pick for the Redskins. That bears repeating: 4TH ROUND DRAFT PICK. They plugged him in at fullback and put him in the backfield in front of Terry Allen until finally giving him a chance in 1999. He took advantage of the opportunity, leading the NFC with 1,405 rushing yards, and leading the league in yards per carry (4.8) and scoring by a non-kicker. He had a great start to the 2000's with the Skins, but was deemed "expendable" by a certain Ball Coach who shan't be named (on an unrelated note, my 6-month old just took a Spurrier in her diaper...it stunk.) The following season (2003), Davis helped lead the Carolina Panthers to the Super Bowl. Serenity Now!

As for C.P., everyone here knows how happy I have generally been to have him as our primary back since 2004. His first carry as a Redskin was a long-distance touchdown run. His combination of speed, power, and personality made him a lot of fun to watch - admittedly more so when we were winning. Although I had my doubts that he would come back next season (and uncertainty still remains), I will be happy to see #26 on the field next season in burgundy and gold. (That said, I still think it would be irresponsible to fail to bring in a young back to platoon with Betts and Portis...Stephen Davis...cough cough...4th rounder.)

With Davis and Portis in the fold, our running game should be POTENT. In today's poll, we will take the 2 highest vote-getters and add them to our roster. I am very open to carrying 5 running backs, so if there is a big sentiment for the 5th guy, I won't argue.

I will throw some support behind Larry Centers (who I loved as Redskin.) He and Brad Johnson work well together, both in real life as well as on paper for this team we are building. He is one of the greatest 3rd down backs in history, and in 2000, I believe he caught 81 balls. Not too shabby, since we are going to need a guy out of the backfield to catch for us.

Other than that, some of the other players to consider are Ladell Betts, Rock Cartwright, Mike Sellers and Kenny Watson. As always, write-in votes are encouraged in the comments section. (I see Sellers pulling in Ethan Albright-esque numbers on this poll.)

What I really want to talk about with you all is who is our #1 back: Davis or CP? I think that should be a good discussion.