Based on a variety of tweets I was able to piece together some of the OL the Redskins interviewed yesterday. All of them ran zone blocking schemes in college. I should first mention that the Redskins have started negotiations with Casey Rabach. Casey said, "If the right deal is in place, there's no reason to hit the open market." 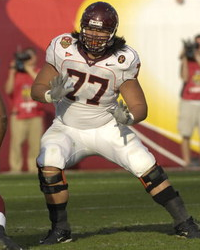 Based on his NFLDraftScout.com review, he played in the Senior Bowl. He has a mean streak, but has showed inconsistency with penalties and stronger, smaller ends.

Scouting Report: Wang is an athletic big man with some rough edges. He can explode into players while on his feet. As a tight end in high school, his team likes to run behind him quite often, and he is normally taking on the key block in the plays. Defensively, he plays a standup defensive end, rushing on 90% of the plays. In the film, teams ran away from him normally, but he never gave up on plays. On the plays to his side, the corner is always secure and runners are forced inside. 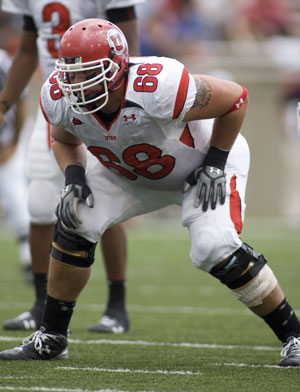 Pass blocking: Looks like a guard on the edge, lacking the height and athletic build expected of most elite left tackle prospects. Rarely gets beat by defensive ends on outside rushes, however, because he has a quick set, solid footwork and smooth lateral movement. Inconsistent with his punch, but will reset his hands inside and play with a wide base to anchor after the initial contact. Adeptly picks up twists and safety blitzes. Will get knocked back by a strong punch, but usually recovers to anchor. Inconsistent on cut blocks for quick throws. Plays a little nasty, and doesn't let his man up once on the ground. Inexperienced pass protecting from a three-point stance.

Run blocking: Didn't line up with his hand on the ground and fire off the ball very often in Utah's spread offense. More of a positional run blocker, moving his feet to put himself between the defender and the ball. Punches his man in the numbers when attempting to drive, but doesn't move his feet to sustain the block. Good on combo blocks, pounding the guard and finding a linebacker to take out of the play. Gets low and drives forward in goal-line and short-yardage situations.

Pulling/trapping: Only occasionally blocks on the move, but has the feet to trap if moved inside in the pros. Has only average foot quickness moving down the line, but adjusts to oncoming defenders while in motion and gets a hand on hustling linemen to prevent them from getting to the ball. Gets low to cut block defenders he can't reach.

Initial Quickness: Good enough with his kick slide off the snap to prevent even quick pass rushers from turning the corner. Not called upon to drive block often, and needs practice firing off the snap into an opponent's jersey from a three-point stance.

Downfield: Not fluid running to cut off linebackers between the tackles, but moves adequately and doesn't let go once he gets there. Reaches defenders in space - even used to knock out cornerbacks on slip screens - but comes in off-balance and will struggle to sustain if he doesn't latch on. Inconsistent moving his feet to stay on his man.

Intangibles: Durable three-year starter who is a vocal leader in the locker room. Coaches love his attitude and work ethic in practice. 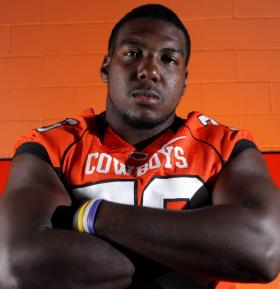 A big man who plays best in big games. Shows advanced skills as a pass blocker and should be able to play left tackle in the NFL. In 2008, scouts noted his ability to neutralize Texas defensive end Brian Orakpo, the Big 12 defensive player of the year and a Pro Bowler as a rookie for the Washington Redskins in 2009. Okung uses great footwork and athleticism as a pass blocker but seems to lack the level of aggression scouts like to see in a run blocker. He appears too satisfied to merely maintain a position on run blocks rather than trying to obliterate defenders. - Frank Cooney, USA TODAY/NFL Draft Scout

Okung at the combine: "We blocked a lot of zone in college, so I'd say I'm quite familiar with it."

Reporter to Okung: "Some say your the best lineman ever out of OK State"
Okung: "Our O-line coach would tell me otherwise."

Am I the only one that gets excited for OL scouting? I am really looking forward to Brian Orakpo's comments on facing Okung in college. I have my homework assignment for the day.