Jimmy Clausen Pro/Cons from Southbend Campus; Great Athlete but Not a Leader

Share All sharing options for: Jimmy Clausen Pro/Cons from Southbend Campus; Great Athlete but Not a Leader

It's well-known by now that Mel Kiper has Jimmy Clausen going to the Redskins with the #4 pick:

Kiper said he's spoken with Clausen's former teammates, opponents, coaches and everyone raves about Clausen: "I think he has a chance to be great. His accuracy is outstanding. His leadership is exceptional."

Huh? I really question Mel Kiper's sources only because my cousin is an undergrad at Notre Dame and knows several of the football players. In regards to Clausen's leadership, his Irish teammates say the exact opposite. I had my cousin email some stories and here's Clausen's teammates' responses...both pros and cons:

First of all, he didn't bitch unless he noticed someone not hustling (something that he really didn't like), he was a team guy. People don't think he is out there for stats, he apparently loves football and has a huge desire to win.

He is very passionate about the sport, he is dedicated to being the best he can be, he is a competitor and will do anything to win, he hangs out with the football players, he is maturing very well.

Just about everyone pointed to the fact that he is not a natural leader. They refused to give particular examples but just about everyone respects him. One player said, "If the Redskins are looking for a great leader, someone to bring the locker room together, and ignite a new desire to win, look elsewhere. But his football ability is unquestionable."

Clausen has this larger than life mentality. Word is that he showed up to campus his freshman year wearing a crown, but that might be a little irrelevant because then he was just a 19 year old kid. He has a very pompous attitude and is no fun to talk to, but then again I am not on the football team. He was punched in the face outside a bar following the UCONN game which we lost. Some people there said that he instigated it, but I don't know for sure. People around campus don't like him. Girls think he is ugly, guys think he is a cocky prick.

He tries to be the team leader but lacks natural skills. He apparently puts forth the effort. The team appreciates this and trusts his abilities on the field. [One teammate] said going in [when he first joined the team], he thought Clausen was going to be a prick. It turns out that he does not fit the profile others believe him to have. He is a little immature and likes to have fun but never takes it too far. And again it was noted that he is maturing.

If you're hated by everyone on campus, that view is certainly going to be shared by some teammates. Shouldn't the starting QB of a D1 school be loved by everyone? Girls crying for attention and guys begging to do shots with him? It appears it's quite the opposite. It's said that his teammate, George West, had friends in town and one of them punched Clausen in the face for running his mouth. I'll certainly defend Jimmy to a certain degree, though. Who's mature their first two years of college (especially after being on ESPN multiple times as a Senior in High School)?

If Clausen were to come to DC, Shanahan certainly has experience guiding a QB with poor leadership skills (Jay Cutler). I can't imagine ANY first round draft pick coming into Redskins Park with an ego and getting away with it. Haynesworth would step on his head. Cooley would tell him to shut the F up. Any of the U guys would certainly put him in his place...

So, what does this all mean? I think it means that the interviews with Clausen take a whole new light. Really drill down and ask the hard questions why his teammates feel this way.

Kiper continued his evaluation of Clausen, which fits with what the rest of the ND team feels:

Mel Kiper: People keep questioning his size and I don't understand why. What's wrong with 6-2.5, 220. That's ideal size. In addition to that, his arm strength is above average. Some have said he's maxed out physically. I don't understand that. His arm strength will improve once he gets to the NFL. That's been proven. He's tough. He played with the flu and the toe injury. He played with a team that didn't have a great supporting cast. The defense was awful. He had four games where he won on the final drive.

Is the "leadership" value over-rated? The Redskins offense certainly is lacking one. Jason Campbell is respected and loved on the team, but he doesn't embody that fiery attitude you see in Super Bowl QBs like Ben Roethlisberger, Drew Brees, or Peyton Manning. I would think any team that uses a top 5 pick on a QB should get that. 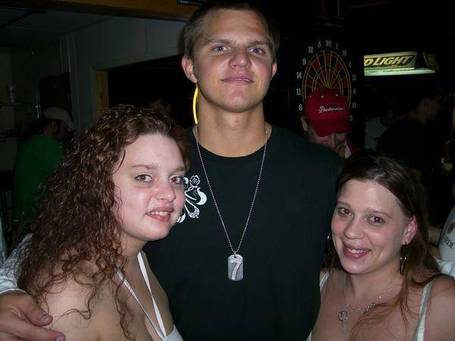 Update 12:45PM: I've moved this image to the end of the post since it's not meant to be the article topic. I originally put it at the top since it was an image that was unique (ie - not a common google images one).