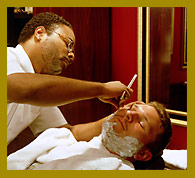 Image via thegentlemensquarters.com
[Jansen getting cut in another way]

Since photoshopping Vinny Cerrato is a bit of a  'dead horse' these days, let's take a look at the 2010 UFA class that once donned a Redskins uniform. If you HAD to pick one player to sign back to the Redskins, who would it be? There's not a clear cut winner here in my opinion.

My comments and selection after the jump.

Kelley Washington (BAL) - 34 rec, 431 yards, 2 TDs. Skins had him in minicamp for a short stint. Also infamous for his "Squirrel" TD dance.

The heart wants me to pick Jon Jansen. It was clear cutting him last year was a bit foolish since, you know, the Redskins started 8 different RGs. That doesn't necessarily mean Campbell would have gotten pancaked any less. Jansen was paper mache in 2008. On the defensive side, Carlos Rogers is continually left out of all the 'new regime' coaching interviews, which makes me think Ryan Clark? What a mess. Antonio Pierce doesn't do much for me at this point given his bulging disk neck injury. Brandon Lloyd and Jason Taylor know better than to show their faces here. And why would they? Big pay day...see you later! Ugh...well, at least it can be said we didn't give away great talent! (only draft picks).

I'm going with Jon Jansen...let him retire a Redskin as a backup role.