Break It Down: Redskins 2009 Defensive Stats In Extremely Fine Detail

Share All sharing options for: Break It Down: Redskins 2009 Defensive Stats In Extremely Fine Detail

Well, we’ve broken down the ProFootballFocus stats for Jason Campbell and the Offensive Line so far, now it's time to move over to the defense. The defense has always been an enigma to me since it's always been labeled a "top 5 defense," yet they're always bottom 5 in turnovers, which is what really makes a defense. Catching an interception and allowing the WR to strip it and run for a touchdown...not so much. Either way, with the overhaul in the coaching staff, it's time to look at players on an individual basis.

A quick look at the chart reveals what we already know. The best defensive players were on the line and the worst were in the secondary. A complete flip from the 2008 season.  Anybody care to make the argument now that Albert Haynesworth was not the reason this D played as well as it did? He was a force on the line this year despite all the fans and major media that chose to rather focus on the 33% of plays he sat out. Fletcher, as expected, had another great season and I'll highlight him after the jump. 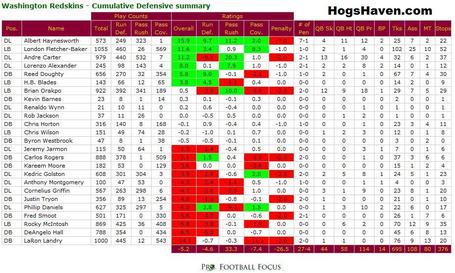 Let's start with the bottom three:

Laron Landry: His pass rush and rush defense ranked well, but he got a whopping -14.1 for his pass coverage. Not much to say here because it was obvious watching games he was a liability, and it was equally obvious teams targeted him (Raiders continually putting Darren McFadden out wide). The coaching staff never was able to get through to him to make the sure tackle versus the knockout punch. The ball is now in Haslett's court.

My unsubstantiated Evaluation: Move him back to SS full-time and take our chances with Kareem Moore or Chris Horton (assuming Eric Berry is not a Redskin). Chris has proven he has a nose for the ball. There were some growing pains with Sean Taylor at first getting burned, why not give Chris a shot there?  It can't get worse than it already is.

DeAngelo Hall: Overall, I thought the Hokie had a good season, but his stats took a major hit week 1. That Mario Manningham play comes to mind where the Giants WR eluded Andre Carter, Fred Smoot, and Hall all on the same scoring play. Hall scored a -5.8 for rush defense and that was evident in the numerous missed tackles throughout the year. That missed tackle on Turner versus Atlanta game comes to mind for me.

My unsubstantiated Evaluation: Definite keeper. He's the only defender the Skins have that can squeeze a ball, so if the new defensive coaching staff can correct the tackling, I don't see why he couldn't compete for a Pro-Bowl spot again.

Carlos Rogers: Loso statistically was a good defender against the run at 1.5. The amount of double-moves he got burned on this year didn't hurt his stats as much as I thought they would. He played a total of 84% of the snaps this year, which is a lot more than I anticipated given his benchings. Either way, Carlos to me is a player that can still improve (off-season #3 I have said this).

My unsubstantiated Evaluation: Keep him. I don't think many teams think highly of Carlos, yet he does so many things well. The days of over-paying are over, so offer Carlos a modest salary. If he wants to leave, fine, but he is a steady CB that can run tackle and defend the pass. The Redskins have too many holes to fix. Carlos can be a holdover until they have time to fix CB. I think the entire OTAs Carlos should be off to the side working with the 5th string QB who simply throws ball at Carlos as hard as he can from 15 yards out.

Reed Doughty: This is a tough situation. He was all over the field and was easily one of the Redskins best tacklers. I can't see Horton and Doughty both sharing the safety position again, so I'll be watching this one closely. He deserves to be a starter somewhere, especially with the great sportsmanship he showed when he gracefully accepted his backup role to Horton last year.  In short, I'd be happy with Horton or Doughty as SS, but the Laron Landry situation complicates this even more.

Honorable Mentions: Lorenzo Alexander had a great season even without his special team heroics.

Side Note: Andre Carter. His run tackling is an obvious problem, which makes moving to a 3-4 a little more worrisome for me. If it ain't broken....

As for London Fletcher, I threw together how his overall stats (11.6) against some of the other Pro Bowlers: