With the Wizards having a West Coast late start vs the Kings and the Terps easily cruising over UNCG, I decided to watch the Redskins massacre at the Meadowlands again. Several things jumped off the tape: missed tackles, dropped balls, and Ma'ake Kemoeatu's inability to do anything. I mean, the Redskins are seriously playing 10 on 11 with him on the field. I've been beating this drum since pre-season, but it's frickin week THIRTEEN and still the Redskins are sticking with this model.

Missed tackles:  Reed Doughty and Kevin Barnes each had one on Jacobs late rushing TD. Kareem Moore had one in the backfield on the Giants first drive that went for a huge gain. Rocky also whiffed on that play.

QB: As bad as the stats were turnover-wise, the Giants dropped two additional interceptions (one a tipped ball and another a horrible pass where #5 never saw the CB). McNabb also never saw open WRs, a problem that plagued Campbell.

Dropped balls:  Armstrong, Cooley, Fred Davis, Mike Sellers. The Sellers one was real tough to watch since he was WIDE open and there was no one in front of him as far as the eye could see. Do you want to know why we have so few 3rd down conversions? Dropped balls.

Offensive line: Jammal Brown did a decent job against Tuck all game. Trent Williams was in obvious pain and Heyer played A LOT more than I remember. Jason Paul-Pierre and Osi had their way Stephon most of the day. It was real tough to watch.

Defensive Line: If anyone should be suspended the last 4 games, it should be Ma'ake Kemoeatu. After the jump is a collection of still shots I took from throughout the game. Kemo CONSISTENTLY was getting manhandled by just the Center or Guard. It was rare for him to see a second blocker, but when he did, he was on the turf. The Redskins were primarily a 3-4 in the first half. The second half I didn't see a single 3-4 set (there were a few disguised 4-5 fronts that turned 3-4, but they never showed it). Almost every play the Redskins rushed 4 or 5 and the results were MUCH better. The Giants, who were still very much trying, had trouble rushing and passing and only scored 10 points in the 2nd half. Six of the eight Giants' second half possessions they punted (four of those drives were three and outs). Hey, I have an idea: STICK WITH IT. Here are some pictures and captions from the game.

I'm not sure why Kemo hits the ground so much. Perhaps he's in BlackOps training where he can crawl his way to the QB faster. 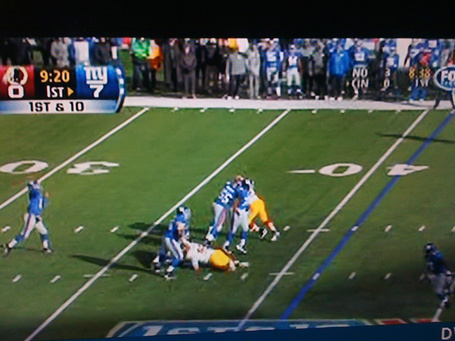 More pics after the jump...

No, that's not Albert Haynesworth. That's your Nose Tackle on all fours. Look at the other Giants' Guard looking for someone else to block. Sad. I should say Kemo does give effort on plays out there, he's just flat out ineffective in a 3-4. 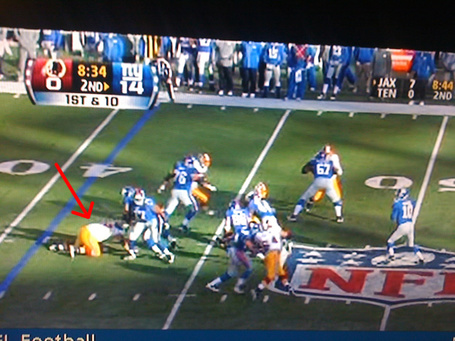 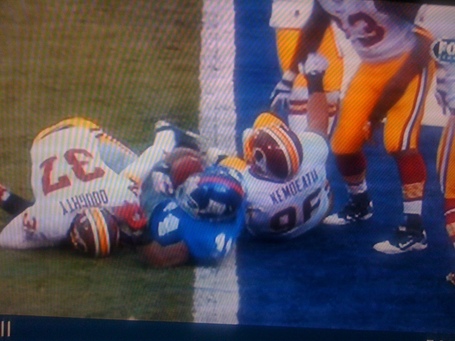 This play really is something to watch in motion. Jacobs steamrolls both Doughty AND Kemoeatu. As Jacobs hits Reed, Kemo has still yet to take on contact. For some reason, he just falls as if he was shot in the leg, but in live motion, it looks like he's rolling over both. 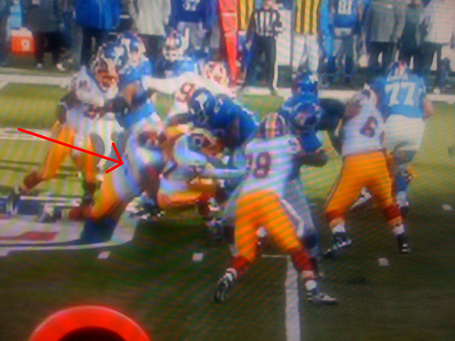 With a single NYG blocker (the Center), Kemo is pushed straight back as Bradshaw hits the LOS. Kemo was 400 lbs a year ago, so it's clear he should spend his off-season with Phillip Daniels working on his legs. 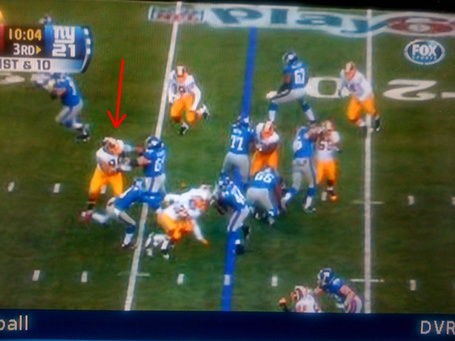 This is a run play (Jacobs has the ball at the LOS in the middle of the screen) where the Giants entire line shifted to their right. Look at Kemo! He looks like he got hit by a train! He's a full 5 yards left of his original NT spot from one blocker. The LG is engaged with Golston and that leaves a racing Kevin Barnes to have to deal with tackling him, which of course he does not. TD. Hold your gaps fellas. 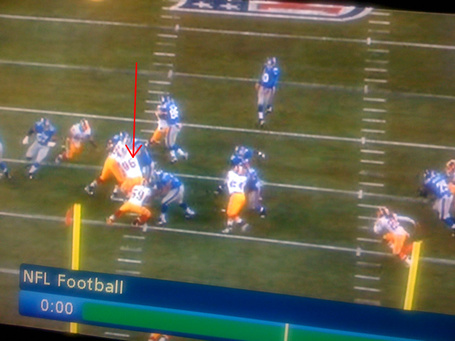 I have to throw Heyer under the bus here. Look at the jump Osi got off the snap. Heyer is still in his stance and Osi easily got around the edge to cause a sack/fumble. 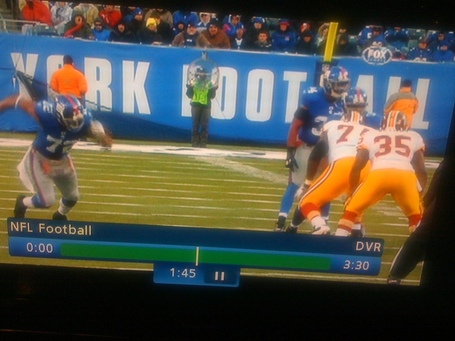 Why do we continue to push the 3-4 with Kemo? It's week 13 and nothing has changed.