Note: After the jump are videos and screenshots of key plays.

So, I decided to watch the Jaguars game again last night paying special attention to the number of pass rushers Haslett sent on the defensive side, and the number of two tight end sets Mike Kyle Shanahan  used on the offensive side. Here's what I found:

Watch Nose Tackle Anthony Bryant on this play. He pushes Jaguars Center, Brad Meester, directly back into Garrard. Ma'ake Kemoeatu has never been able to do this and Bryant had varying levels of success like this throughout the day. Meester is a 33 year old Center, but still, even in the double-blocks, Bryant sustained a push.

- Roydell Williams did not look good. He did not maintain a block, which led to a key tackle that should have gone for more. On another play, he fell down on his route and stayed down even though the play ended up coming his way.

- Keiland was the primary 3rd down back and he did a 5-star job in picking up blocks.

- Rex Grossman consistently had a cushy pocket with room to step up. When the pressure came, though, he struggles to get rid of the ball safely. On one play he threw into the chest of a DL in point blank range (dropped), the other he took a sack outside the hash marks, and several others he had intentional groundings (or close calls).

- Kory Lichtensteiger is a hustler. Even on 10 yard passes he's running hard up field to be there in case of a fumble.

- You know me, I try to find the worst and the OLine was solid all day. The Jaguars are ranked 28th in the NFL in sacks, but it's clear this OLine is gelling. Big Test against Big Blue.  Heyer had a couple plays he was late off the snap, which resulted in gains for a loss, but overall he gets a passing grade.

This is easily the Redskins' worst defensive play of the game. Kevin Barnes comes in untouched at the top of screen on a blitz and completely whiffs on Garrard. As a result, he gets the pass off. On an extended run, several tackles are missed, with no help from Macho Harris, who takes out Andre Carter's legs right as he's about to make the stop.

I don't want to pick on Rabach too hard. He had a decent game, but two plays stood out poorly. What in Dear Lord is Rabach trying to do on this block? Take out the legs perhaps? I dunno...but it's an epic fail as he gets steamrolled.

This is more comical than anything, but check out Rabach's (#61) failed diving block. If this was up for an ESPY, it would be in the same category as Reed Doughty's butt tackle.

Here are the Redskins with a pre-snap, 4-man front, and one of the rare times they were not disguising a rush.... 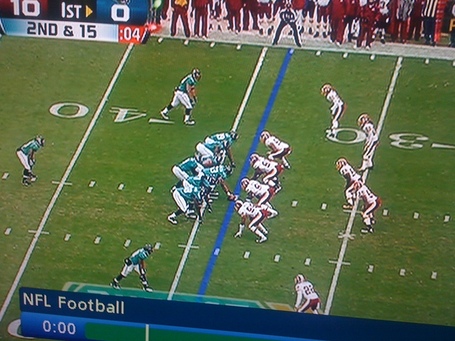 All four lineman hold their gaps at the line of scrimmage. 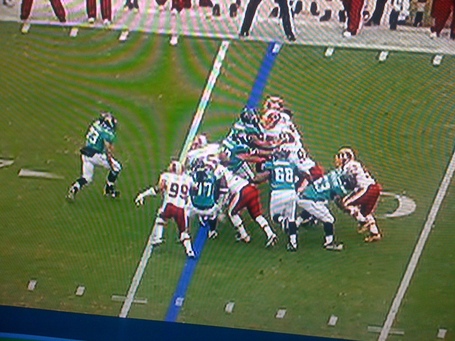 Here's another example of the great work by the DLine holding their gaps. Absolutely no where for Jennings to go and this was a common shot throughout the day. 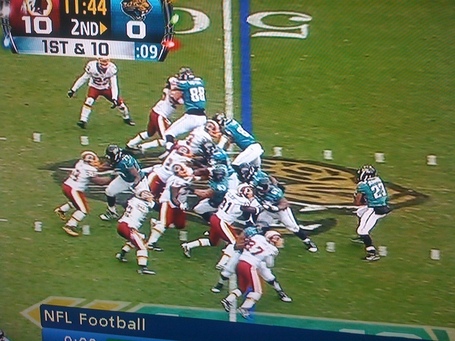 Here is Rob Jackson's "Orakpo" moment.....(no penalty called of course). Why exactly did they move an extra referee in the backfield?? They got a 1st down on this play. 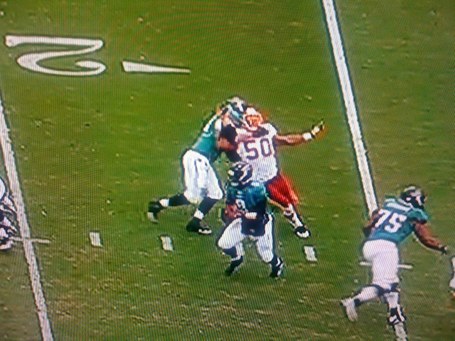 I mean, look at this push. The line of scrimmage is a full 7 yards back on this five-man rush. QBs throwing the ball with no pocket to step into will for sure lead to turnovers. 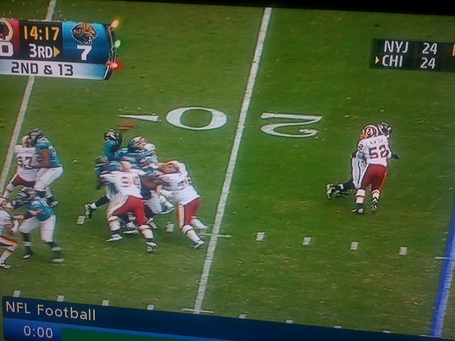 OK, time to have some fun with Stephon Heyer. He had a solid game overall. HOWEVER, on this goal line play, Heyer (all the OLinemen were scrunched together) fell on the push and lost his helmet. He decided not to move the next 6 seconds (it ran down to 12:11 and he was still sitting). Haynesworth has gotten killed for this. It should be noted that Moss and Roydell Williams did this on two separate plays as well. 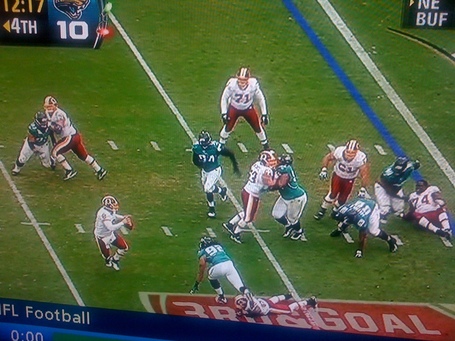 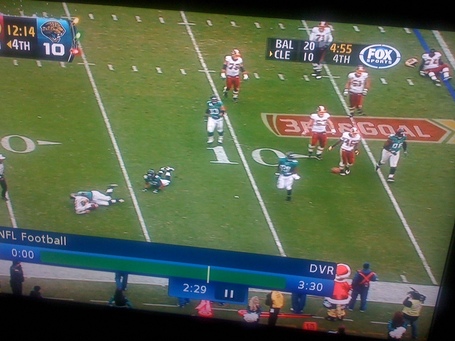 Not sure if you noticed this but DeAngelo had his gold teeth in on Sunday (or some souped-up mouth guard). 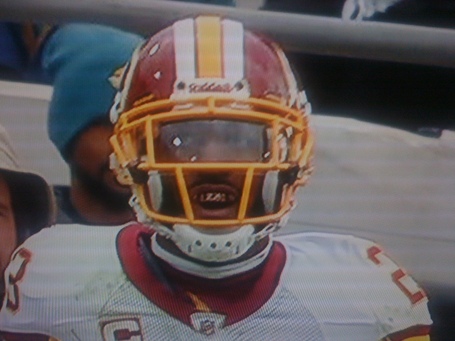 I watched the Rex Grossman interception multiple times and the call really could have gone either way. The Jags defender made a clean grab, and by this still, you can see his left foot is down and he has control. 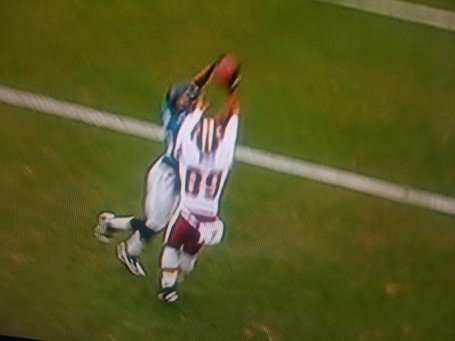