Redskins Insider - Carlos Rogers hopes sore calf won't keep him out of season finale
"It's kind of straining a little bit. I know from the previous one I had last training camp, if I kept going, I was going to pop. And I didn't want to do that."

The Backup Plan: Mike Shanahan Finds A Few Solutions After A Win In Jacksonville - SB Nation DC
The Redskins have been "evaluating" player the last couple games, and if Sunday's win over Jacksonville is any indication, they may have stumbled on some people who can help in the future.
Redskins Week 17 game is now a 4:15 PM start.

D.C. Sports Bog - LaRon Landry has an Irish potatoe on his shoulder
Details of the procedure LaRon had done. 12 weeks recovery.

My cousin texted me these two pictures last night. He found these old Redskins tickets stuffed inside an old vinyl album he was given. Why they weren't used baffles me. 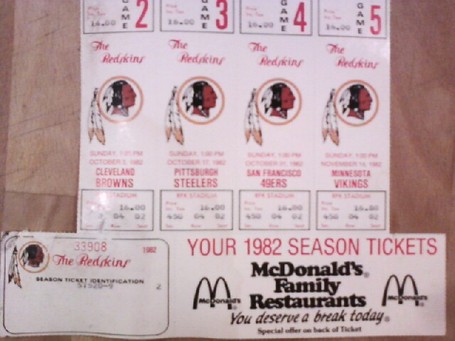 And then the text message: "Young fans who have never known a good Redskins team." Either way, what a cool thing to find. $16 for an upper decker seat....not too shabby. 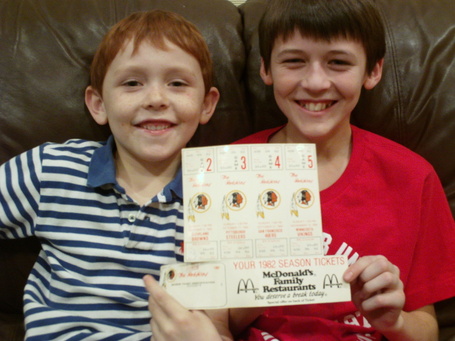