Former Washington Redskin, and Penn State great Lavar Arrington recently took time to participate in a unique event in the Persian Gulf, that combined college football greats, playing along side active military heros in a flag football game.  The "Connect to Home Bowl", sponsored by Tostitos in conjunction with the U.S.O., featured two of the greatest college coaches of all time taking control of the helm.  Bobby Bowden and Gene Stallings had the pleasure of leading the two teams, which included former players such as Arrington, Jim Kelly, Rodney Peete, Jevon Kearse and Zach Thomas among others.

Highlights of the event can be seen at halftime of the 2011 Tostitos Fiesta Bowl on ESPN on January 1, 2011. 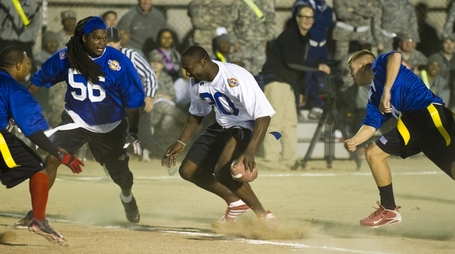