Captain of the Tailgate: The 2010 Mike Wiggins Trophy Goes To...

Share All sharing options for: Captain of the Tailgate: The 2010 Mike Wiggins Trophy Goes To...

Every year, the tailgate at F21/F31 holds a Beirut tournament in the parking lot. It bears the name of a former FedEx parking lot attendant who tried to push us around a little before finally succumbing to the fact that we aren't bad guys. That and the fact that after over ten years of Tailgating Our Guts Out (patent pending by Lance), we know our lot better than anyone wearing an orange jacket and driving a golf cart.

This year, we held two tournaments, because we had two extended tailgates: the home opener against Dallas and the Sunday Night affair against Indianapolis. On that fateful day in September, yours truly--partnered with Kris Mount--took down the field. All that is lost though, as the most recent winners are the most remembered. Kevin Ewoldt and Matt Kund went the distance and took home the trophy.

Why am I writing a post about Beirut this fine Friday afternoon? Because I simply had to find a reason to post a picture of Kevin, pimping the championship trophy in the Club Level during the game.

Feast on it Hogs Haven! (after the jump)

I think these are even Captain Morgan girls that were doing some marketing at the game that night. So the sponsor of this post could not be more appropriate. 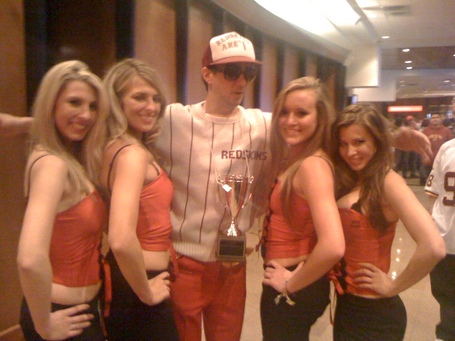