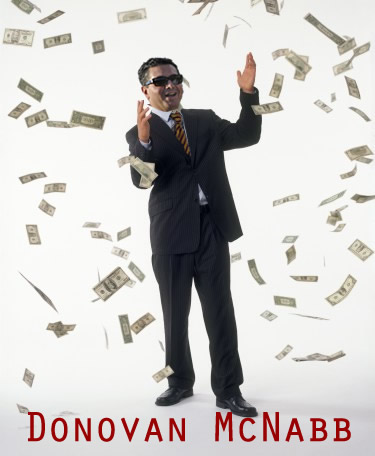 The Washington Redskins and quarterback Donovan McNabb have agreed to a five-year, $78 million extension that could be worth up to $88 million with incentives, a source with knowledge of the agreement told ESPN NFL Insider Michael Smith.

The source said $40 million of the deal will be guaranteed. [espn]

This franchise really couldn't be any more bizarre if they tried. Three weeks ago, Mike Shanahan had this to say regarding McNabb's contract:

"The only thing that I talk about is guys getting ready to play and playing at a very high level. If I ever talk about contract with a player, it'll be at the end of the season, for obvious reasons."

And then they bench him, and then they sign him. First things first, let's take a look at the deal financially. Tom Brady signed a deal two months ago getting $48.5 guaranteed - 4 years, $72 million. So, the Redskins got McNabb for less and an extra year. Not bad. The Redskins of last year surely would have paid more. The timing really couldn't be better (assuming he doesn't lay a stinker tonight) given all the drama regarding his perceived notion to bail after 1 year. A lot of fans have to be relieved that our two draft picks will not be completely wasted now. McNabb, who turns 34 in 10 days, will be 39 years old in the last year of his contract. Any bettors want action he doesn't play all 5 years?

More on this later...I gotta head to Fedex Field.