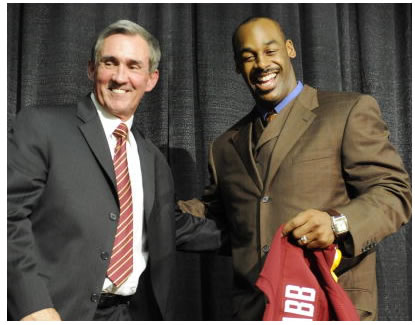 No, It's not a really a love story. It is more than anything a power struggle during the first year of marriage.

A lot of people are attacking Shanny for the stupidity of the decision he made in the Lions game. Looking at 1:45 on game clock in Detroit, I think that we would all agree that it was a bonehead move. Now, to many of us the sky is now officially falling and the world is in fact over. Here we go again 4-12 part deux.

I will now try to explain why this might have saved our season.

I think we can all agree by now that Mike and Kyle both have a certain ego to themselves when it comes to running this team. In my opinion, it is a needed attribute to be a successful leader. An ego (if played right) creates an atmosphere of zero tolerance and forces more out of your team. Look at every successful coach in the NFL today and you will see an ego in every one of them. Except Tony Dungy...the guy is a playmaking genius and great motivator.

Now back to us. We are supposed to be running a West Coast offense. Under the West Coast offense your line doesn't need to be all that great. By design you are to chip the field away with high percentage passes and a balanced run attack. How has that been working for us? I'm sure you all have noticed that when McNabb throws one of these passes deep to Galloway, AA, or Moss under double coverage you would have seen that Davis or Cooley is open in the flat for at least the first down with no one on them. The most noticable of these have come in the final minutes of a game with plenty of time on the clock (i.e...the Colts game). When he does throw close, he is just plain off his game. I think that most of the frustration that the Shannies have for McNabb is that he is trying too hard to be the hero. He is trying to make the big play over just getting the next first down. Now cue the SuperBowl winning headcoach who only sees his QB going against his gameplan then throws the game losing INT.

After watching 7 games and 58:06 into the 8th Shanny finally decides to make his point. I dont care that you are D.McNabb. I dont care how many Probowls, or game winning come backs you have. I will pull you and lose a game just to prove my point. I am in charge of this team and either you get with it or you dont play. Yes it's an EGO... Yes, its annoying to all of us that bleed burgundy, but It will help us in the long run.

It will help us in this aspect. McNabb now knows that he needs to get his junk together. He is still working for a contract either for here or somewhere else. If he is benched of continues to play bad than he will lose money. There was no better time than just before the bye week. Two weeks to get everyone in line. Yes, we lost to the Lions. Yes, it sucks for us fans. How do you think it feels for the players? How do you think McNabb really feels that he was pulled for Sexy Rexy only to watch him lose big? He will now give the Shannies all the respect that they demand so that this team can be what we all want them to be. Winners.

I think the whole BenchGate gould have been watered down a bit had the Shannies just told the truth. That McNabb was doing his own thing on the field and wouldn't  do what the coach's wanted him to do.