As we did last week, and the week before, we chat with former Miss DC 2009, Jen Corey, about the upcoming Redskins game.

Hogs Haven: So, you were at a bar in Boston watching the Skins vs Eagles game...I had some obnoxious Eagles fans at the bar I was at...what about you? Any good stories?

Jen: Well, I think we may or may not have been the obnoxious Redskins fans at the bar in Boston. We went to the first bar to eat and watch the 1:00 Jets game. We quickly realized that the bar we were out would not be playing the Redskins game with sound so we started calling all the local bars near us to find out which one would play the game with the sound on in the bar. We made it there just in time!

The Packers have arguably the best QB (Aaron Rodgers) and LB (Clay Matthews) in the NFL...stopping them is going to be real tough. Do you have any game-plan ideas and/or even outside ideas/pranks to distract them like sending Miss DC 2010 to their hotel?

Jen: Well first of all, Brian Orakpo is easily the best LB in the NFL so that's just a ridiculous comment, and Donovan McNabb is the best QB as well. Now that we've cleared that up, we could choreograph all the fans to carry colored cardboard squares, which when held up all at once would show a giant picture of Orakpo's face. This would likely result in the Packers surrendering, so its not really a prank but rather a strategy to win.

What's your prediction for the game and why?

Jen:  Redskins 76 Green Bay 3. Because after 4 quarters of domination, Shanahan will feel sympathetic and let them get a field goal.

Jen: I polled my male Redskins fans in my life and they all had the same answer: "abort." But since the number one rule to answering a question at Miss America (other than avoid talking about abortion) is to answer the question given to you... I'm going to have to go with Cerrato. I'd rather have a kid that reminds me of the burgundy and gold than the blue and silver.

I can't believe I didn't think of this earlier, but here's a picture of our opponent: Miss Wisconsin from 2009....woof! Winner....DC! 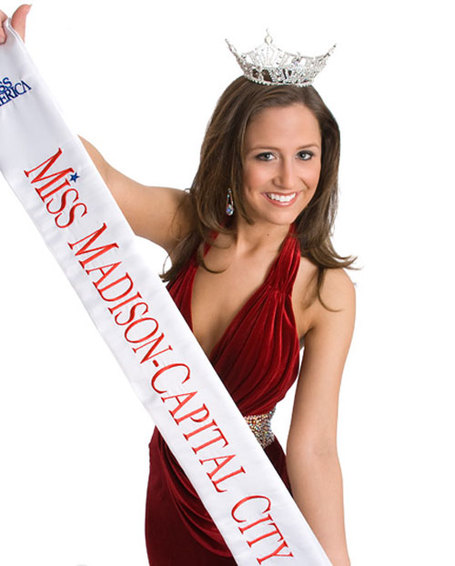