Charting the Redskins Pass Distribution vs the Packers

Share All sharing options for: Charting the Redskins Pass Distribution vs the Packers

I was curious to know how McNabb was spreading the ball, so as I watched the game a second time, I jotted who and where McNabb was throwing the ball to (I included plays that ended in a penalty since it was still a play). Not surprisingly, Cooley is a major target in the 0-10 yards area. Although Torain's stats were not impressive, his effort was. There were multiple carries and rushes where he was stuffed for a loss/no gain and was able to fight for several extra yards...something zero of our RBs could do last year (Portis included). I'm convinced this guy will have another great game.

Looking at the Redskins playing time for each player, Fred Davis was on the field for 17 offensive plays (out of 80) and was not a target once. As much as Anthony Armstrong has come on, Fred needs to see more looks. He's got great hands, YAC ability, and we know he can do it all (as he proved last year). Line him up as a WR off the line - something.

Below, the large number is the jersey number and the smaller number is how many yards the throw was. If there's a second number after the dash, that's the number of yards after the catch. 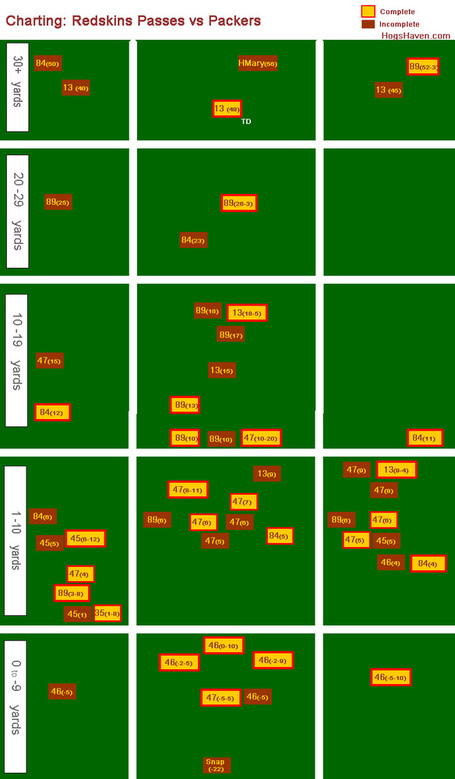