The Washington Redskins Can Beat this Eagles Team; Here's Why....

Share All sharing options for: The Washington Redskins Can Beat this Eagles Team; Here's Why.... 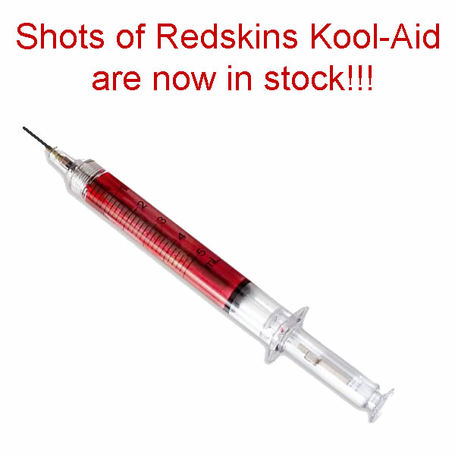 OK, Redskins fans. This has been a brutal week. We've all played sports before (except for Ken who played tennis), and I've let the fundamental rule of losing slip my mind. Moving on. The Eagles lost to the 5-11 Oakland Raiders last year and still made the playoffs (Yes, that same OAK team that the Skins SMOKED....and Jamarcus Russell played the entire game vs PHI). Bad losses happen...admit your mistakes and fix them. The Redskins can beat good teams as we see year in and year out. A lot of news has come out the last 24 hours which makes me think this Redskins team can win in Philly, so it's not a glass of Kool-Aid Redskins fans need, it's an injection. Roll up your cuff.

So, Haslett brought the heat 40% of the time - none of which were corner blitzes it appeared, which is terrible idea against a QB who is known to be one of the most accurate QBs ever coming out of college. The thing is, the Redskins defense actually does have a lot of strengths and is starting to evolve:

The Redskins prefer cover three, and opponents know that.  The Redskins disguise their pressures well, but their coverages behind it are pretty well defined.  In the first two weeks, the Redskins were almost exclusively a zone coverage team.  This week, we ran a lot of man, both with safety help and without it.

Let's be clear, Michael Vick is ready to be exposed. If you look at that Jaguars game, he was throwing balls off his back foot, and took a lot of hits:

In Week 2, Vick was hit on 24 of his 44 pass plays. On Sunday against an inferior Jaguars team, he was sacked three times, tackled on four running plays and had 10 additional hits by the Jaguars' defense. He's getting around 20 hits a game, and he's not as big as a power running back.

Why is that? Jags DT Tyson Alualu explained:

"He holds the ball longer than a normal quarterback would and you just have to keep with your second efforts and keep hunting. That's how you have to play him."

The Skins' defensive players have iterated it all week, and surely the Eagles coaches know what's coming....jam the WRs at the line and dedicate a player to spy on Vick. There will likely be a rotation of spys between Landry and some defensive backs. If there's any day the Redskins safeties will be earning their paycheck, it's Sunday.

Corner DeAngelo Hall didn't do a lot in the walk-through, but Shanahan said he's fine. So that's that.

Donovan McNabb has completed 31 of 43 passes on first down for 474 yards and two touchdowns. Clearly the passing game is clicking on this down (as opposed to third where it's failing).

Sounds like Josh Bidwell will punt Sunday, which is a bit stunning.