"Those who forget the past or doomed to repeat it." - Unknown

In my weekly routine of finding opposing team's coaches pictures to post, I came across this gem. How much does the Redskins' salacious attempt to acquire Jay Cutler stink of the Jeff George signing? Ugh. As bad as the Redskins are right now, it really is assuring that the team is going a new direction. It's rumored the Mike Shanahan deal is done and Mike (of course) will be the highest paid coach of all time at $10 million a year. That is absolutely ludicrous. Coaches should be fighting to work for this historic franchise, but it's the exact opposite. Cowher and Holmgren refuse to come here and the only way to lure the best names is to pay double their value. It really sickens me, but you make your own bed.

Ken and I will be following the action here and on Comcast's live game thread...so follow that as well. And as I stated before, tune in to Comcast's Post Game Live show to try and stump BMitch and the gang. 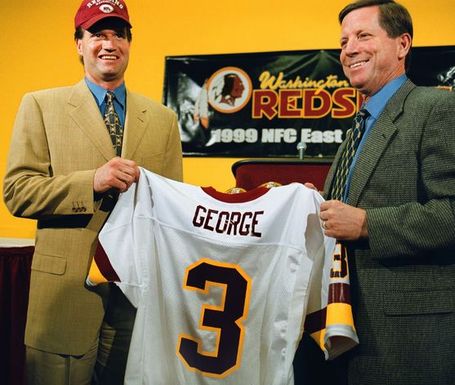