Share All sharing options for: Washington Redskins All-Decade Team - Locking Down the Corners

We'll keep this moving, and to keep it at least somewhat fresh and lively, we'll jump around the field back and forth across the line of scrimmage. To reiterate the rules: a guy just had to suit up between 2000-2009 to be eligible. If we don't like a guy because he only stayed for a cup of coffee, fine. But if we decide that a guy who has little service time in this period is a player we want or need, his tenure in D.C. won't be held against him.

Note: Despite my desire to go with only two quarterbacks, the will of the people can't be ignored. This battery of signal-callers gives us some optionality and above average depth. If you want to avoid the deepest of depressions, try not to think too hard about the QB tandems other franchises could toss out there:

OK...that's enough...can't put myself through that. Feel free to toss some others out there. If you have the time, please come up with at least one or two that would be WORSE than ours. It would make me feel a lot better. 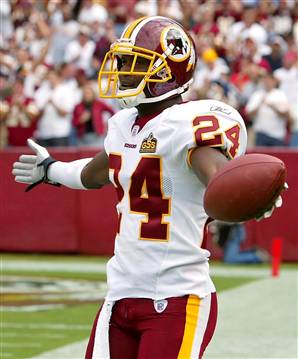 Going into the weekend, I figured that it would be best to knock out a couple easy picks and let you guys stew over who to add.

Champ Bailey and Darrell Green are going to get automatic bids today at the corner spots. We will carry five corners on the roster at this point, with the option to add another one later depending on who we like and what we still need.

Don't get hung up on the fact Darrell was 100 years old by the time his career was winding down early this decade (we are getting him at his average best as a Redskin.) He could still cover and he would still throw his body at ball-carriers. Even if we were hesitant to add a 40-year old to this team, his presence on the field and in the locker room is big. He was an emotional leader and the players around him appreciated him for his physical abilities as well as his consistency. We could use that on this squad.

As for Champ, what can I say? I am still upset he left town. In retrospect, he kind of did what many fans wish they could have done: He told Dan Snyder he was done with him. Champ is no dummy. You could say he didn't miss out on anything professionally by moving on to another team. My only argument there would be that any defense that had both Sean Taylor and Champ Bailey on it would have been exponentially better than a defense with only one of them. Finally, when we get to the WR position, be prepared to flex Champ onto the offensive side of the ball. He is going to play both ways on this team (in fact, I envision games where Sean Taylor and Champ Bailey would play together on BOTH sides of the ball.)

I sincerely doubt there will be much debate over the worthiness of either Champ or Darrell. They are layups. Beyond them, I think we have some serious debate. I will go on record now as saying I do NOT want Deion on this team. It is our first chance to snub an otherwise deserving athlete who probably belongs on the All-Star roster of every team he ever suited up for, but he is not welcome on this team. Any guy who has gone on record saying that his choices not to tackle running backs were "business decisions" is not the kind of football player we want on this defense. What we lose in natural covering ability we gain in attitude and ferocity. We want teams to know they can't run on this unit. With Deion on the field, there is a red carpet to his side for running backs. That is unacceptable. So think hard-nosed corners who can cover but who are not afraid to assert themselves against the run.

There are plenty of guys we can add at this position to strengthen it...let's put it this way: we're much stronger at cornerback than we are at quarterback.

Fred Smoot led the team in INT's from 2001-2003, Shawn Springs did it in 2004, and Carlos Rogers...uhhh, well the records do indicate he has some INT's (I believe his career total is 6...ugh.) Walt Harris, David Terrell and DeAngelo Hall are also guys who are in the conversation. I will put everyone down as individual options and we will put in the top 3 vote-getters. In order to keep the poll/vote a little easier to handle, I'll limit it to 5 or 6 options. If people want to suggest someone outside the vote, make sure to kick up a comment thread on that person and make a case. When we are filling out the team in a couple weeks with extra players at various positions, those are going to be the guys we end up choosing from.

Remember, I am not "forgetting" anyone. I am just throwing out some ideas. If you feel strongly about a player and you don't put him up for debate, then you are forgetting him!