Share All sharing options for: Redskins 2009 Down-by-Down Analysis Report; I Need Some Advil

Are we sick of stats yet?  Well, we all know the Redskins offense was pretty inept given its' 26th ranked 16.6 points per game average. Via some help from NFL GSIS, I was able to compile the stats and % success for each down and the yardage for all the Redskins drives. A special hat tip goes to PommyLee for help organizing and beautifying the spreadsheet (click to enlarge). 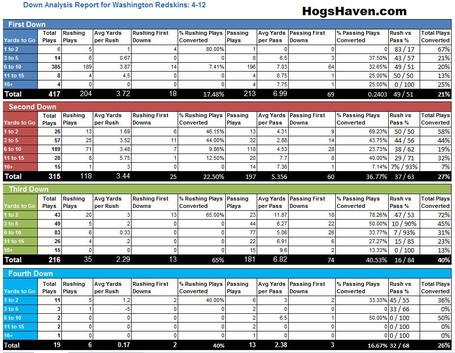 Studying the sheet, several things popped out to PommyLee as well:

You cannot expect to be a winning franchise where in every down and distance greater than1-2 yards of the marker, you convert at less than 50%.

You cannot expect to win Tennis if you don't serve Aces to give you some free points, and you cannot expect to win NFL games when you only get a 1st down off 1st and 6+ (ie first downs either standard or with a penalty to give you a kick-start) at less than 20% of the time.  That is the equivalent of getting into a rally on every point of your service game (sorry for the Tennis analogies, Australian open is on at the moment and have watched a few matches).

And the Redskins should be embarrassed to have a rushing YPC average of less than 3.% yards overall and less than 4 yards on 1st down and with about a 50% conversion rate rushing on Short Yardage plays, I mean have we suddenly become some other team, we are the Skins, big strong Lineman run it down your throat win 3 Superbowls etc, since when did we think we can win if we can't do any of them things well.

It would be interesting to see these stats broken out when Zorn was doing the play-calling versus Sherm2, but I think we've seen enough depressing stats today. And we all know how the see-saw would tip in that comparison. Anything we missed that you see?