Share All sharing options for: Washington Redskins All-Decade Team of the 2000's - Quarterback

Nice job everyone on circling wagons on our All-Decade team philosophy.

I think the consensus out there is that we will be a run-first team. Given our upcoming selection of wide receivers, I think we can agree that a power running game is our best chance to move the ball consistently.

Here is how we will work the formation of this roster:

For each position, I will offer a guy who I think should make the team and why. I will then throw out a bunch of other candidates and we will vote to fill up the roster spot. Don't worry if you think we should be carrying more players at a particular position. As we go, we will lock in the no-brainers and guys we think make the most sense. At the end, we will see how much room we have left and add players accordingly. Who is going to be the Marcus Mason on this All-Decade team, sweating out the last cuts to see if he makes the roster? (Sorry CJ, it won't actually be Marcus Mason.)

I am tempted to adopt one of the more recent trends in the NFL and go with only two quarterbacks. Perhaps you will agree after you read this list of starting quarterbacks in the 2000s for our Washington Redskins.

Could we find three guys on this list to throw a helmet and pads on? Sure. Would we have a battery of dudes that says "All-Decade" though? Ummmm...no. We'll just say that we only wanted two guys to begin with, and maybe people will gloss over the possibility that our hand was forced. 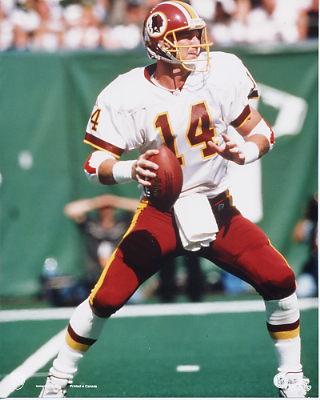 I am compelled to name Brad Johnson as my first selection to the All-Decade team. What makes this so hard is that he spent some time playing for the Cowgirls. But as a fan, I am going to get over it because his exit from Washington was so utterly absurd and not at all his fault. He could have played his career out in D.C. under a different front office. Instead, he found himself staring at a brain trust that actually thought Jeff George was the "guy".

So he went and led the Tampa Bay Buccaneers to a Super Bowl championship in 2003. The dude completed at least 60% of his passes for 13 straight seasons (only Peyton Manning comes close with 10 straight seasons over 60%.) He was athletic, strong, and mobile in and around the pocket.

In the "Did You Know?" category, Brad Johnson is the only player in NFL history to have thrown a touchdown pass to himself. He accomplished the feat in 1997 (as a Viking), catching his own deflected pass and putting a juke on a defender en route to a 3-yard touchdown.

Despite a reputation for leaning on fast, short, safe passes (earning him the nickname "Checkdown Charlie"), Johnson was more than capable of hitting the deep ball. On our All-Decade team, an established running game will open up some sexy downfield patterns and Brad is heady enough to make those throws.

I think of all the signal-callers that suited up in burgundy and gold, he probably makes the most sense as our starter. Who should join him? Today's vote and subsequent discussion will focus on Mark Brunell and Jason Campbell I am sure. I will include Todd Collins and Patrick Ramsay in the vote as well just to see if they garner any love. If we want to have three quarterbacks, we can, but only if there seems to really be a split opinion. Keep in mind we might need the roster spot for a Red Zone specialist or two (Darnerien McCants anyone?) that might not otherwise make the team.