Share All sharing options for: Break It Down: Redskins 2009 Offensive Line Stats in Extremely Fine Detail

Yesterday we covered Jason Campbell, now it's time to review the guys that shamefully protect him. It's almost not fair to discredit a line where only 2 of the 5 starters played all 1026 snaps and the RG position saw EIGHT different starters. However, it is fair to cast blame on the man who built this line since as fans we knew it would not hold after the 2008 season (which is why the "I survived the Vinny Cerrato era" t-shirts relate so much more).

We all know the run blocking was brutal (though respectful at times late in the season). I am going to focus on the pass blocking since QB has always been the hot topic of need this decade week.

The first thing that stands out is how poorly Levi Jones ranks (dead last). 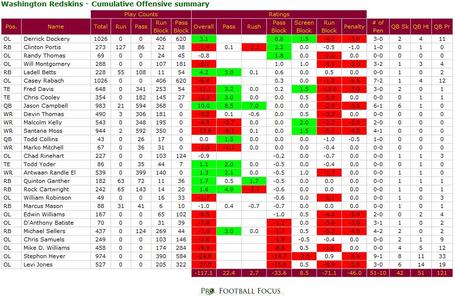 I thought he played well, and I actually emailed PFF after the first Dallas game to debate it. His response:

Try and find me one single positive contribution in the running game where he actually helped a running back get significantly more yards.  I watch and grade about 70 hours of football a week and I think it's simply impossible to judge offensive linemen without following them individually 3-4 times a play.

As for the pass blocking:

By the definitions we use for hits and hurries its impossible for an OL to get beat, get downgraded, and it not affect the QB.  So, if a QB is hurried he has had to take some form of evasive action and hence, even if he still makes a great throw, that's down to enhanced play on behalf of the QB, not anything the OL has done. If you go back over our Evan Mathis interview he intimates that we are slightly lenient on hurries as his OL coach expects him not only to keep the QB clean but to keep a certain buffer too.

Well, that pretty much confirms for Levi isn't worth inking in as the 2010 starting LT. With some off-season work, perhaps he can compete for a starting spot, but at worst, he is a decent backup. I broke down Levi's individual stats after the jump, with which DE he was facing, and it is clear Levi had some pass blocking issues. 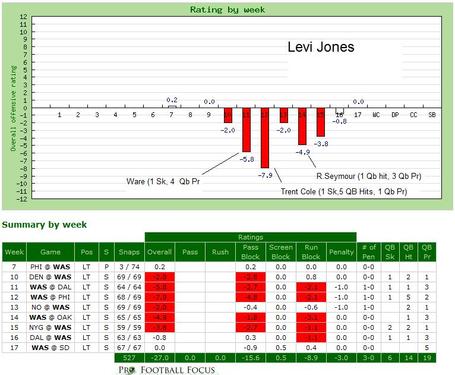 The Skins porous rushing rank also highlights Sellers inept blocking. That DET goal line play where he made no effort and Portis asked for his benching still burns me.  Seven of the team's starting blockers are the WORST blockers. Yikes. I am looking forward to seeing what Shanahan does with this mess because building an O-line is not a 1-year fix.

Chris Samuels was playing hurt from OTAs, which SHOULD have been a red flag to the Redskins front office. Mike Williams played well in run defense, but still has a lot of training to do with his foot-work. I noticed it in training camp, and it's clear opponents were able to get though. So, what do we do with all these guys? Shanahan I'd imagine will want to clean house. I'd be surprised to see anyone but Dockery and Rabach starting next year from the current OL roster.

As a quick note, I pulled up the stats for Jeremy Bridges and Jon Jansen. Although they were not stellar rankings, their numbers bested all the RGs the Skins fielded. Another resume builder move for Jim Zorn and Vinny Cerrato letting them go. Also, Jon Runyan, who was a free agent until week 13, played solid in all games he competed in.

Note: PFF has gained some national attention even being linked by Peter King. We obviously don't watch film like this site does, so basing judgement on their findings is more accurate than anything I could come up with. The Football Outsiders being #1.