Break It Down: Jason Campbell's 2009 Stats in Extremely Fine Detail

Share All sharing options for: Break It Down: Jason Campbell's 2009 Stats in Extremely Fine Detail 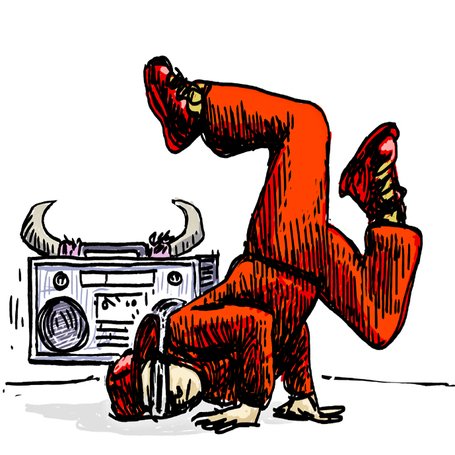 Well, we’ve hit that awesome stretch of the off-season where we over-analyze the previous season and make egregious statements for what the new coaching staff will bring in. I am one that likes to focus on stats, which begins my multi-part post of statistically breaking down the 200 Redskins STARTING roster. ProFootballFocus.com is an interesting website who I have built a small relationship with. The guys at PFF follow EVERY player on the field 3-4 times for EACH PLAY and mark a score for that player’s contribution. (I provided the synopsis of how they do their ratings after the jump).

Who better to start with than

The Redskins' skipper had a decent year throwing for 3000+ yards and 20+ TDs. All the talk this off-season was, "this is Jason’s last year to prove if he is a bust or not." It appears we need an extension given the porous OL casting. Regardless, the stats don't lie and Campbell had obvious success when not pressured. The 2 QBs in the Super Bowl are the best protected Qbs...just sayin. Here’s Campbell's breakdown on passing where the line stats are ATT-COMPL-YARDS-TD-INT. The number in green or red signifies PFF’s rating. 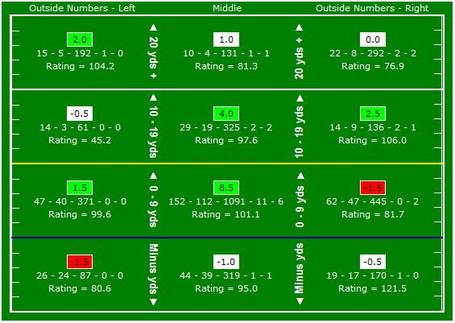 Looking at the pass distribution over 20 yards, the attempts appear to be pretty pathetic. Peyton Manning and Joe Flacco almost doubled in attempts over 20+ yards, but looking further into it, Campbell threw more attempts over 20 than Carson Palmer and Kurt Warner. Huh? Yep. Ironically, the Redskins beat both of these teams in total plays 40+ yards.  The real reason for that is the screen. I’m getting a headache remembering the countless screens this team ran since the OL woes made this team exhaustingly one-dimensional, but I like this chart since it accurately captures plays that were ATTEMPTED over 20 versus achieved from a screen or Punter option.

Back to Campbell, his QB rating is high pretty much all over the field.

It’s greater on the left due to the better hands of Santana I presume.  The dink and dunk over the middle to the TE and RB was the Redskins wheel house and highlights this team’s assets in Fred Davis and Chris Cooley.

We’ve all come to the same belief (for the most part) that Campbell is adequate enough to get the job done.  Given how high his QB ranking is, that proves that. And just wait until you see PFF’s rankings on the Redskins Oline (post tomorrow). The amount of red on my screen looks as if my laptop was part of a gruesome murder scene.

Here's Campbell's weekly rankings. It's clear how much Jason improved when Sherman Lewis took over after the BYE week and Campbell was given the wrist-band to simplify play-calling. 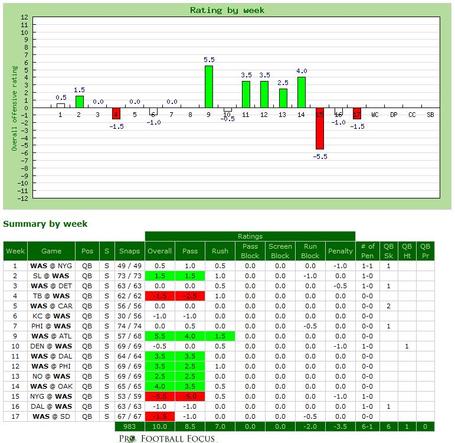 Each grade given is between +2 and -2 with 0.5 increments and an average of 0. A positive intervention in the game rates a positive grading and vice versa. Very (very) little draws a +/-2 rating. In fact the distribution of non-zero grades is like this:

The grading takes into account many things and effectively brings "intelligence" to raw statistics. For example a raw stat might tell you a Tackle conceded a sack. However, how long did he protect the QB for before he gave it up? Additionally when did he give it up? If it was within the last two minutes on a potentially game tying drive it may be rather more important than when his team is running out the clock in a 30 point blow out.