Share All sharing options for: The 4-3 vs. the 3-4 in Washington

This off-season, we have heard rumblings that incoming coach Mike Shanahan was interested in switching the Redskins' defensive base formation from a 4-3 to a 3-4, a major departure from the philosophy that provided the Redskins with top-ranked defenses nearly every year since Joe Gibbs came back.

Initially, switching to a 3-4 in Washington doesn't make a lot of sense to me. London Fletcher, the defense's best player by far, is a perfect fit for a 4-3 where he has a lot of mobility and is the first player on the second level, away from the OL, so he can make a tackle. Also, imagining Phillip Daniels or Albert Haynesworth in a 3-4 doesn't really make sense, and it also means Cornelius Griffin, who is really underrated in my estimation as an asset on the DL, will not see the field much because there isn't a second DT spot.

So what are the benefits of a 3-4? The 3-4 is designed to make blitzing more creative and difficult to contain. With four linebackers, there is more choice in which player gets assigned to coverage and which player can attack the line of scrimmage. Furthermore, it spreads out the offensive line's protection schemes a little more, which makes it harder to protect the quarterback.

The negative of the 3-4 is that there are only three down linemen, which does not exactly play to our strength. We are loaded at DT with Haynesworth, Griffin, Golston and Montgomery, who were all able to rotate in at some point when there were two defensive tackles on the field. When you have those kind of players on the field every down, it is a lot easier to stop the run, because it's harder for the offensive line to move those kind of guys around. However, it is a bit more difficult to rush the passer with four down linemen, rather than a speedy OLB, every play, as we saw this season.

But is the 3-4 defense a good fit with the Redskins? More after the jump.

According to Wikipedia, the Redskins are one of two NFL teams that have never run the 3-4 (the Bears are the other). Several of the league's great defenses -- and several of the teams that are still alive in the playoffs -- use the 3-4. We all know about DeMarcus Ware and the Cowboys' 3-4; the Ravens and Chargers also have mastered the scheme. The Packers, who had the second-ranked defense this year, also used the formation despite having to move personnel around (Aaron Kampman comes to mind). The Steelers, of course, have been using the 3-4 since before most of our readers were born. It works for them pretty well, in what I'd call the understatement of the decade.

As has been reported, Haslett has experience running the 3-4, when he was in Pittsburgh as the DC a long time ago. But he also ran the 4-3 with the Saints, the Rams and apparently last year in the UFL with the Florida franchise.

But let's assume Haslett wants to explore the 3-4 for the Redskins. With our current personnel, it would look something like this. (click link for source) 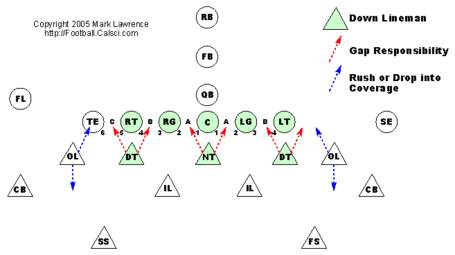 I would imagine the DL would be Carter, Haynesworth and Daniels. Our OLB would be Brian Orakpo and probably Chris Wilson, given his skill set. Our ILB would be Fletcher and McIntosh (assuming he stays this offseason). Of course, this assumes we make no moves in free agency or the draft (unlikely).

Right away, you see the advantages of the 3-4 in rushing the passer. Haynesworth will be double-teamed, meaning one of those guards will have to pick him up. Say it's the LG, for this play. Then the right DE (or DT, in this graph) and the OLB will both be the responsibility of the LT. Obviously, a running back or someone will want to chip the linebacker. But this formation is what gives DeMarcus Ware, Elvis Dumervil, Terrell Suggs, Lamarr Woodley so much success -- the quarterback will simply not be able to have a lot of time when you have those kind of guys rushing the edge. Putting Orakpo in that spot, frankly, would be unfair for the rest of the league.

The disadvantage comes in the running game. With the LB's split so far out wide, the middle is vulnerable. Of course, the Redskins do enlist the services of a tackling machine in London Fletcher, but the LB's will be more exposed to big OL who can come down the field and take smaller LB's like Fletcher (or HB Blades) completely out of the play, because there are fewer DL, forcing (gulp) LaRon Landry to make tackles closer to the line.

In the NFC East, there is the tough balance of having to stop top running games (Giants, Cowboys, Eagles) versus pressuring some of the best in the league at quarterback (Manning, Romo, McNabb).

However, teams with the right personnel, like the Cowboys, Ravens, and Packers, can stop the run with the 3-4. Four of the top 5 rush defenses -- Green Bay, Pittsburgh, Baltimore, Dallas -- ran the 3-4 this year. (The Redskins were 16th against the run, and 8th against the pass, FYI.) They also get a lot of sacks and create havoc for their opponents' quarterbacks.

Each of those teams, though, has the right personnel for the 3-4. Let's take the Ravens. The most important position of the 3-4 is arguably the nose tackle. The Ravens have Ngata and Gregg, perfect fits for that position. They have bigger ILB's -- Ray Lewis and Tavares Gooden, and fast, havoc-wreaking OLB's in Suggs and Jarrett Johnson. The Steelers have Casey Hampton at NT, and then Farrior and Timmons as their ILB's, along with the unbelievable James Harrison and LaMar Woodley at OLB.

I don't see Haynesworth as a true nose tackle, given that his best skills are collapsing the pocket as a pass-rusher and disrupting the middle of the field during run plays. He seems like a prototype 4-3 DT to me. I also don't see Fletcher able to shed a lot of blocks from huge guards or being well-suited to split the middle of the field with another player. I also don't see Phillip Daniels or Cornelius Griffin being good fits for this kind of defense, but they are really well-suited for the 4-3 we've run the past few years. It would seem our defense would be really different in the 3-4, and we may not have the personnel to make a quick adjustment. Given the success of our defense for the last five years, it would be disappointing to see it become anything closer to average than it already is.

So, if any of you made it this far in the post, what do you reader(s) think about the 3-4 in Washington? Could it work? Would we have to draft on defense to adjust? More importantly, can we even afford to do that given the trainwreck of an offensive we have?

Do you even think it will happen? Personally, I don't. Haslett will have to adjust to his personnel if we want to be successful, and our defense seems to hinge (as it should) on the skills of Haynesworth and Fletcher, our two best players.