Update: Colt Brennan placed on IR for the year. Chase Daniel is rumored to not make the team or practice squad. 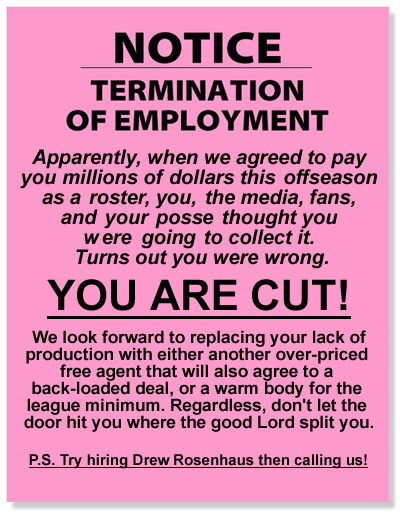 We'll keep an organized list of cuts as they come in. I think it's safe to say Dave Rayner, Byron Westbrook, Doug Dutch, Trent Shelton, DJ Hackett, Chase Daniel, and Agnone will be seeing their pinks slips. I'm not 100% sold Anthony Alridge is a guaranteed cut after his big fumble. It probably will be the deciding factor, but late in the game they were giving him TONS of touches to redeem himself. I wouldn't be opposed if he did squeak in. He's not going to be returning kicks anyway.

Note: We originally made this pink slip logo at the end of last year when Jason Taylor was cut and the Redskins were cleaning house doing their salary cap magic, but the picture still applies on some level.