Is the Redskins Cornerbacks Situation a Serious Cause for Concern?

Share All sharing options for: Is the Redskins Cornerbacks Situation a Serious Cause for Concern?

A new friend to Hogs Haven, Jon, who uses the author name 'Marion's Crackpipe', of the blog DC Landing Strip, recently posted an entry citing the Football Outsiders statistics for Smoot, Carlos Rogers, and DeAngelo Hall last year....and the results are not promising for the Redskins CB future. Statistically, DeAngelo Hall is not a true #1 CB despite being paid as one. 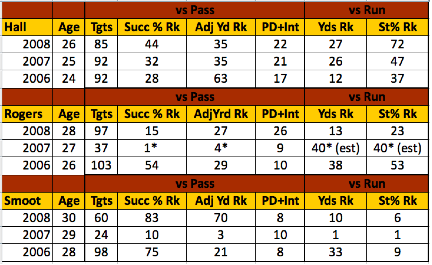 After two games, it's easy to target DeAngelo since he misplayed that corner end-zone touchdown pass versus the Rams and missed tackles against the Giants. It is only week 2, so I'm not going to throw any of the players under the bus yet, but some things do stand out.

First, it is very easy to forget that [Carlos] is 28 this season, and is 2 years older than Hall.

Indeed, that is easy to forget. Carlos is statistically a better corner than Hall across the board, but he is never considered "elite" due to the few numbers of turnovers he pulls in. One thing is clear though...'Los takes elite WRs out of the game.

One thing we can evaluate is DeAngelo Hall's career statistics and whether Dan Sndyer over-paid. Not shockingly, yes. Asante Samuel's age and contract cost is very similar to Hall's, yet Asante ranks MUCH higher in his ability to defend the pass and create turnovers. If the Redskins had decided not to sign Hall, I can't imagine any other of the teams paying $55 mil. Again, I love DeAngelo and he will give the offense some desperately needed turnovers, it's just clear he got paid more than he should have based on what the proven elite CBs get paid.

Fans commonly would defend with the argument,

"Yea, but Oakland doesn't count. With Washington last year he stepped up!"

Not really. Hall's numbers were consistent to his career. In his 6 games with WAS last year, Hall defended or picked 27% of balls thrown his way. So common math implies the Redskins overpaid by approximately 12%.

THis year, Hall's stats lines are: 3 passes defended, 1 INT, and 10 tackles, which puts him in the middle of the pack of corners so far. For people that say he's not living up to his contract, he actually is. He's playing to his career averages. Moral of the story: Don't pay a player what you're hoping they'll perform at, pay them for what they are and build in incentives for what you hope.

If 2010 turns out to be a salary cap year, the Redskins could be in big trouble, which Jon pointed out:

As long their health holds-up though, our group is pretty good; the problem is that football is a contact sport, and DeAngelo Hall's contract may prevent us from keeping the real #1 CB on our roster.