Interview with a Detroit Lions' Fan About Redskins Game this Sunday

Share All sharing options for: Interview with a Detroit Lions' Fan About Redskins Game this Sunday 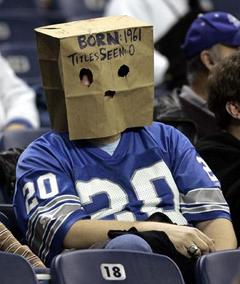 It's Wednesday and thus it is time to put the Rams game, the drama with Coach Zorn, and the Robert Henson TwitGate behind us. Who would have thought the Lions game would mean as much as it does? Zorn is deflecting hot seat questions on his own radio show, and the Redskins are fighting to avoid being the first team to lose to the Lions in 20 games. Trivia...who was the last team to lose to the Lions?

Continuing the "Interview a fan" fun from last week, a friend of mine from the D.C. Improv, Philippe Cicchini, hails from Michigan. I can't recall one of his Facebook updates not belittling mentioning the Tigers, Pistons, or Lions in some form. I threw some Q&A his way hitting such topics as whether the Lions should start Culpepper, the Lions firing ALL their defensive backs after last season, and what he would do if he ran into Matt Millen in a dark alley.

Hogs Haven: The Lions have given up an average of 390 yards per game (granted, it was the Vikes and Saints they had to face). How do you think the defense will hold up against a sputtering Redskins offense, especially now that the Lions lost their starting LB Ernie Sims?

Phillipe: Being without Sims will definitely hurt the team's chances on defense.  He's easily one of their biggest teeth-rattling hitters and an emerging leader on that side of the ball.  But, even with him in the lineup the first two games, they were giving up an average of 134 yards on the ground.  If the Lions are able to contain Clinton Portis, the Lions might have a shot, since Jason Campbell will be coming in with a bum ankle, thus possibly hindering his mobility and ability to make plays through the air.  So, the Lions are catching a break this week in that they're finally going up against a quarterback whose last name isn't Brees or Favre.  But, the Lions haven't won a game since, seemingly, Abraham Lincoln's administration.  CAN the defense hold up?  It's entirely possible, but the D-line's going to have to play smart and put pressure on Washington's QB, especially if Campbell can't go.  WILL the defense hold up?  If history's any indication, we're probably looking at loss number 20 in a row if the offense doesn't figure out a way to hold on to the ball.

Hogs Haven: Against the Vikings, the Lions used Stafford conservatively. Do you think Duante Culpepper should be trying to get the first win or is Stafford ready to play? (The Lions have a NFL worst 40.5 QB rating through 2 weeks.)

Philipe: This is a great question.  Contrary to what the rest of the country may have thought, I think the majority of Lions' fans believed the best move would have been to trot Culpepper out at the beginning of the season and bring Stafford along slowly, like the Packers did with Brett Favre and Aaron Rodgers.  Then again, Rodgers wasn't the number one overall pick and didn't come with a $41 million price tag, and that's probably the main reason for the difference in approaches.  The preseason news was that Culpepper had shed some weight and was looking great in practice.  It seemed like the perfect scenario for the rookie to learn in.  It's not like the alternatives consisted of guys named Charlie Batch, Mike McMahon, or Ty Detmer.  But, now, you have a situation where if the rookie continues to stink it up, the coaching staff has to turn to the guy they benched at the beginning of the year.  Moves like that don't exactly solidify locker rooms.  Culpepper should have started the year, but they've put themselves in a position where they have to back the unproven rookie now.  Then again, they might take solace in the fact that Troy Aikman and Peyton Manning went 0-11 and 3-13 as starters during their rookie seasons, respectively.  And, look how those guys' careers turned out.

Hogs Haven: In a bold move, the Lions fired all of their defensive backs last year. How are all the new corners looking this year? (The Lions currently rank 24th with a 8.5 yards against average)

Philipe: Well, they're obviously adjusting to a new system and trying to build up rapport and communication with each other on the field.  They have a couple of guys with good NFL experience under their belts in Anthony Henry and Eric King, but the secondary has given up a league-leading EIGHT touchdowns in the first two games alone.  That doesn't exactly earn you a spot in the Pro Bowl if you're a cornerback.  However, the second-most hyped rookie on the team (after Matthew Stafford) according to preseason reports was strong safety Louis Delmas - a potential bright spot in the secondary.  He plays with a lot of intensity, but sometimes lets it get the best of him, as evidenced by his two 15-yard penalties for unsportsmanlike conduct against the Saints.  Needless to say, the Lions are probably going to continue having some bad defensive games if they can't stop giving up touchdowns at a record pace and have to rely on a mistake-prone rookie safety to help shut down other teams' experienced receivers.

Hogs Haven: The Detroit Free Press predicted a Lions win while Vegas has the Lions getting 6.5 points. What has to happen offensively and defensively for the Lions to get their first win?

Philipe: Honestly, EVERYTHING just has to come together in one game for this team and it has to last the entire sixty minutes, period.  Some teams can get a win by outscoring their opponents on a day where their defense is off, or by holding a team to seven or ten points when their offense has a bad day.  Fact is, the Lions just aren't that good on either side of the ball.  They're giving up a ton of yards and points and they're turning the football over as though they were earning a commission for each time they coughed it up.  The Sunday they get their first win, their defense is going to have to make some stops - especially on third down - and the quarterback (whoever's playing that day) will have to keep turnovers to a minimum.  Look at last week's game against Green Bay.  Very good first half all the way around.  Horrendous second half all the way around.  They have to find a way to keep it going for the entire game when they get off to a hot start like that.

Hogs Haven: It's late at night, and you're walking down a dark alley when Matt Millen walks right by you. What do you say or do?

Philipe: Oh, the possibilities are endless - probably something Dick Cheney would approve of, no doubt.  Seriously, though.  How bad do you have to be at your job that when you first show your face on television after getting fired, the Detroit NBC affiliate runs a crawl at the bottom of the screen - during the Super Bowl pregame coverage, no less - asking viewers if they think you have any credibility as a sports commentator after sinking a team???  Any person with any kind of decency would have realized it just wasn't working and resigned, instead of sticking around and unjustifiably accepting millions of dollars.  But, don't get me wrong, anyone who knows anything about anything also knows that William Clay Ford is a lousy owner - loyal, but lousy.  He gave Millen a five-year contract extension four years into the worst stretch in team history.  It was something out of The Twilight Zone.

Thanks again brother. This is a tough game for me to predict. After last week, the normal thought is to call another Redskins squeaker....15-14, but my Kool-aid has a lot more mix in it than usual. We've owned the Lions for too long and losing their best LB should hide some offensive mistakes. Redskins 28-10.