Seahawks' Journalist Details the Redskins Keys to Blowout the Rams

Share All sharing options for: Seahawks' Journalist Details the Redskins Keys to Blowout the Rams

We've talked to Rams' fans and heard all the comments from Redskins Park regarding the game this Sunday, but why not ask the team that just played them, the Seahawks? I shot an email over to the SB Nation Seahawks blog, Field Gulls, and they quickly returned my questions regarding the Rams D-line, the Rams WRs, what to expect from the Rams secondary, and the often-penalized, Richie Incognito. 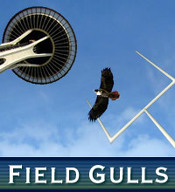 Hogs Haven: The Rams were unable to record any sacks despite having Leonard Little and Chris Long. How was the Seahawks O-line so successful in keeping Hasselbeck upright? Did they not blitz a lot? You'd think Spagnuolo would come up with something to get to the QB.

The answer is in the question. Soon to be 35, Leonard Little, (who missed a portion of the game) and second year end, Chris Long, are not quality pass rushers, but they are the best pass rushers the Rams have. Steve Spagnuolo mixed it up, showing creative looks and a diverse pass rush, but Seattle's offensive linemen were not challenged by the Rams talent itself. When the Rams rushed four, Seattle's line kept the heat off. When the Rams blitzed, Seattle used a mix of screen, max-protect and good blocking from its backs to protect Matt Hasselbeck.

Spagnuolo and Seahawks offensive coordinator Greg Knapp matched wits, and Knapp won. Spags will get the better of more traditional or less adaptive coordinators. He is a true disciple of Jim Johnson. Spagnuolo sent corner blitzes, safety blitzes and regularly involved the linebackers. The Rams executed well, but their dearth of talent undercut them last Sunday. I was impressed though, and I expect the Rams defense to steal some wins against superior opponents.

Hogs Haven: How would you rate the Rams WRs? Bulger seems to have trouble with the WRs and their timing. Is this the case or did the Seahawks corners implement something to disrupt their game plan.

Field Gulls: The Rams are weak at wide receiver. There is no way to sugar coat that. Donnie Avery may develop into a lower-tier number one type, but he doesn't look like a dominant, true number one. Seattle benefited from an advantageous matchup. Josh Wilson is fast, agile and strong, but he's small. Larger wide receivers can bully him with an aggressive body shield--especially on jump balls. That's not Avery's game. He is a fast, route specialist in the Marvin Harrison mold. Wilson matches well against that type and he smothered Avery.

Rams offensive coordinator Pat Shurmur didn't do a bad job though. He used some creative looks and unbalanced formations, but against a heady Seahawks defense, those were sniffed out and squashed. A future opponent should look out for Avery. The Rams couldn't get anything started, so the passing attack was often desperately attempting to convert bad down and distance. If the rushing attack can get going and open up the playbook, I expect Avery to run double-moves and other deep patterns. He is a homerun threat.

Hogs Haven: The Rams D were able to record 3 turnovers. What are the things to watch-out for when facing them?

Field Gulls: Seattle had more to do with the turnovers than the Rams. Matt Hasselbeck was forcing passes into double cover. He doesn't have much arm strength and the receivers Seattle fielded struggle to get separation, so bad decisions turned into gimme picks. Spagnuolo runs a high-risk, high-reward attack. Watch out for free blitzers. A good blocking back is a huge plus for an opponent. I would watch to see how Clinton Portis and Ladell Betts read and react to corner, safety and linebackers blitzes. Against the Rams, Portis might be more valuable for his pass blocking than his rushing. But against Spagnuolo, it's not enough to be able to block in space, a back must also show keen awareness, because half the battle is knowing where the blitz is coming from.

Hogs Haven:  What would be your reaction if the Seahawks traded a mid-round pick for Incognito?

Field Gulls: Richie is an interesting cat. Multiple coaches have bet on the talent and been stung by the stupidity. He needs some impulse control, some Luvox or something. One can't argue he is anything but a terrible guard as is, but there's All-Pro potential. All-Pro. Between the bouts of explosive rage and drive crippling stupidity, he is a nasty, dominant guard that beats down and discourages defensive tackles. But he's like dating a crazy chick. When your excuses run out, you're left with lot of hot, unrealized fantasies and slashed tires.

So the ONLY thing I can think of that can hurt the Redskins is if Zorn and Campbell cannot establish a groove. It's safe to say Soupy will have adequate time to throw on the majority of the plays, so hopefully we can open the field up. We know our WRs can get open....can this game start already?