Interview with a Rams' Fan About Redskins Game this Sunday

Share All sharing options for: Interview with a Rams' Fan About Redskins Game this Sunday 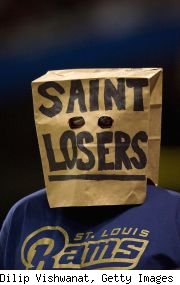 We've beaten the Week 1 loss to death, so we're ready to move on to the Rams game. A good friend of mine, and former roommate, John Dickerman, is a Missourian native and knows everything St. Louis there is when it comes to sports. Since so many NFC East fans could give a rat's ass know so little about the Rams, I thought it'd be worth picking his brain for a quick update on the state of the 2-14 squad from last season.

Ken and I will be doing an interview with the SB Nation Rams blog in the next day, so we'll be able to get a good feel of what to expect. I appeared on their blog last night, and one thing is very clear: The Rams current WRs are about as valuable as Devin Thomas and Malcolm Kelly were to the Redskins last year, specificaly with the timing and accuracy of their routes.

Hogs Haven: What is the current state of the Rams? Are they re-building or do they think they're a legit contender? I noticed they brought in some high-priced free agents on the OLine (Jacob Bell and Jason Brown) the past 2 years.

The Rams are a total disaster as a result of at least 6 years of poor drafting. (The Rams currently have two players on their roster from the 2006 Draft - two players picked in the 4th and 7th rounds.)  There is no question that they are rebuilding.  This year, in particular, they are in flux because they have two high-priced veterans on O who are past their prime (Marc Bulger), or nearing their prime and are ineffective because of a poor surrounding cast (S Jax).  They have added money to the O line with Bell, Brown and Jason Smith, but their O line is inefficient and undisciplined.  (The big story this week was Incognito again taking personal foul penalties - two of them, there's no question that guy has a load of talent, but he has a rep for being a dirty player now.  He's on a short leash with the league, and everyone in St. Louis is frustrated with his immaturity on the field.)  I don't think anyone in St. Louis expects them to win more than 4 games.  6 wins would have to be considered a success.

Hogs Haven: Marc Bulger seems to really have lost a step. Are the fans and Spagnuolo still behind him? Zero points for the Rams last week despite being the beneficiary of 3 turnovers.

Even though Bulger clearly isn't the QB he was 4 or 5 years ago, he still has the support of the coaching staff.  I don't think Kyle Boller is much of a step up.  The fans aren't behind Bulger at all, because fans are stupid and fickle and tend to blame the QB for all of the team's mistakes on Offense.  Keep in mind, though, that the Rams have no effective weapons for Bulger to take advantage of, aside from S Jax.  Their receiver corps must be the thinnest and youngest in the league.  All of that being said...if Bulger can't put together a decent seasons, stat-wise, his career in St. Louis might be over.

Hogs Haven: The Redskins were mostly successful at stopping the run against an incredible Giants backfield. What do you think St. Louis needs to accomplish to beat the Redskins defense, who are highlighted by their stout D-line with Hayensworth? Will Stephen Jackson see more than 16 touches this week?

The Rams have to rush the football consistently and make no mistakes on the O Line.  Last week the Rams averaged about 4.2 yards per carry...not terrible.  But they threw the football an inordinate amount of time, even before falling behind 21-0.  I know the 'Skin's have a great D line, but S Jax is punishing.  If the hits the hole 25 or 30 times, I'm confident the Rams could actually make headway on Offense.  That being said...the Skins could easily stack the box and play the Rams receivers man-to-man and not worry too much about getting burned downfield.  No false starts and no personal foul penalties would be a great start for the Rams O line.

Hogs Haven: The Redskins haven't show-cased a high powered offense yet, but there are still many weapons they can beat you with. What needs to happen for the Rams D to be successful (especially since they had zero sacks last week)? Have you seen any changes in the defense with Spagnuolo that made him so successful with the Giants and under Jim Johnson in PHI?

The Rams need a pass rush in order to be successful, no question.  By all accounts, they didn't even cause MH [Hasselbeck] to sweat last week.  Their Secondary played okay, considering their inexperience, and their linebackers tackled well...but, as one writer in St. Lou said yesterday, even long runs end with a tackle if they don't end up in the end zone.  The Rams need to show some ability to stop the run, or at least challenge it.

One thing is clear, the Rams are still in disarray, but a couple things DO stand out. There defense is pretty good. They forced three turnovers from the Seahawks, and they still have Leonard Little.

Hogs Haven: If the Rams were playing the D.C. Divas without Stephen Jackson and Leonard Little, who would you take?

DC Divas might debacle the Rams without S Jax and LL, but only if Rosie O'Donnell starts at RB.

Thanks again J-Dick for the time.