Share All sharing options for: Jason Campbell Set To Reverse the Curse and One Veteran Defensive Lineman Who Might Be In Trouble 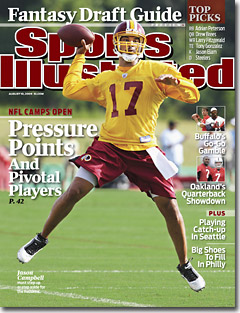 I am pretty confident that we have all talked about it this week--the "SI Jinx". Jason Campbell is featured on the August 10th issue of Sports Illustrated and the first I heard of it was from a Ravens fan that thought it was simply too funny. Since then I have received countless emails and phone calls from friends who root for other teams, wishing me luck this year now that the jinx was officially on.

My response has been steady since the outset: What exactly are we worried about? Listen, I have been a staunch supporter of JC's all off-season, and I continue to be extremely excited about the upcoming year. But what would constitute a "jinx" here? We didn't just sign him to a multi-year, multi-jillion dollar contract. Our team is led by our defense. And the truth is that there are 3, maybe 4 starters on the offensive side of the ball that you would list as more important to our season (Samuels, Portis and Sellers, if you believe my last post). Toss in Cooley, Dockery and Moss and you have an offense that, minus Campbell, is probably going to be able to help our defense enough to win games.

Please don't mistake this post as me making the anti-Jason Campbell case. I am just trying to make the argument that there is a better chance Campbell will buck the trend of the SI jinx. After all, he has a career record of 16-20 as a starter, has thrown all of 35 TDs in 3 years, and is south of 60% in career accuracy. This year is his chance to change the way people view him. Remember, this is a player that Josh McDaniels rejected because he liked Kyle Orton better (it still hurts.) What could the SI jinx do to Jason? It is make or break for him this season, but not necessarily for the Redskins.

Campbell will be given the best possible chance this season to get the most important stat for a QB: wins. He won't be asked to win games all by himself. He will be in charge of keeping the offense on the field, moving the chains, and converting inside the red zone. He'll be handing the ball off a lot in the hopes that we will be able to control the clock. I don't think he will be relegated to full-fledged "game manager", but between Clinton Portis and our defense, the pressure should not be resting squarely on his shoulders to put up crazy numbers. For all of these reasons, I believe that Jason Campbell is safe from this particular superstition (there will be plenty of other excuses available, right?)

On to the second issue of the day: is Renaldo Wynn really going to make this team? This is something I floated around right when he was signed. He was immediately valuable as a guy who had just spent time with the New York Giants defensive line. I remember speaking to him at Chris Cooley's event and hearing the respect in his voice when he told me about the way they did things up there on defense (and the complete lack of respect that unit had for our offensive line.)

If you look at the way this roster could come together, he could very well be one of the last guys to make the 53-man roster. Are you ready to believe Cerrato will jettison a young, developing player like Rob Jackson to keep Wynn, if that is what it comes down to? More importantly, as this camp drags on, and the offensive line continues to show its age, will they be forced to carry an extra offensive lineman? I hear Wynn has been having a good camp. I am interested in hearing what you think on this. There are a lot of young players on this team, and the drafting of Jeremy Jarmon added yet another young defensive lineman that in my opinion, is going to make it very hard to carry Renaldo into the season.