Share All sharing options for: Recap: Redskins vs Steelers - I'm Still Not Impressed

Well, that was, uh, interesting. The young guys definitely have shown improvement, but they're still not displaying that big play ability I'm looking for. The play-calling and QB play could be a reason for this, but either way, things still aren't clicking offensively. Based on the game thread of what I was going to watch:

1.) ANYONE on offense to make a play. Seriously. I'm tired of reading and seeing who looks good in practice. It's time for one of the red shirt WRs to make a play....and I mean 30+ yard play and/or TD.

2.) 1st defense vs Charlie Batch: WIth Big Ben sitting out, I expect Charlie Batch to spend more time on his back than Paris Hilton.

For the 2nd consecutive game there was not a big play, except for the long Chase Daniel scramble. The TD catches by Marko and Fred Davis were smooth, but moving the ball still seems to be an issue.

As for the 1st defense, I wasn't impressed as I thought I'd be. Only 2 sacks and 0 interceptions. Orakpo was all over the field again, but missed a few tackles. Charlie Batch played well, which is not what I expected or hoped.

The Redskins were 9-18 on third down effiency while the Steelers were 7-16.  The Steelers only went 3-and-out once in their first 5 drives while the Redskins went 3-and-out THREE times out of their first five drives (four if we hadn't pulled off the fake punt). There were multiple times Campbell scrambled and threw the ball into the dirt to kill the play. Can it get any more frustrating than that?

Dominque Dorsey to me seems like a nice try, but failed project. He didn't show the speed he needs to get around the corner on plays and he bumbled the ball ona couple of plays. As for special teams, I mean, Wow. It was consistently bad all game. Only once did the Steelers start a drive inside their own 20.

I came across a cool site at fangraphs.com that charts the progression of MLB games, so we'll be doing them for the Skins games. The Redskins first teams didn't control the momentum, while the backups did step up for the 2nd half. After watching the Redskins' first offense these first 2 pre-season games, we might not need to carry a kicker on the roster at all. 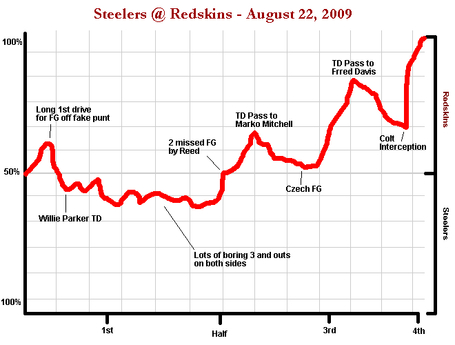