Chat with Behind The Steel Curtain for Redskins/Steelers Game

Share All sharing options for: Chat with Behind The Steel Curtain for Redskins/Steelers Game

With all the time and effort it takes to keep up with all the Redskins daily updates, it becomes almost impossible to truly know the ins and outs of every football team, so it works out well that each week leading up to the Redskins game, I will be able to do a Q&A session with the Redskins' opponents SB Nation blog. In this week's case, Behind the Steel Curtain. These Q&A session will give us a nice insight of what to expect and some key players to look for (fantasy?!).

Hogs Haven: The Steelers offensive line seems to be quite shaky. What are you expectations and predictions for how it will hold up this week against the Redskins D-line, which is one of the best in the business. Haynesworth and Orakpo will both be playing Saturday.

Mike Tomlin has said that he expects the Steelers first team to play around a full quarter on Saturday.  I would assume the Redskins first team would probably play a similar amount perhaps less, so we should have a full quarter of work for our first team against a top ten defense.  If last week against the Cardinals is any indication I expect the offensive line to look improved upon from last year and more confident working together as a cohesive unit.  Darnell Stapleton who started for the Steelers last season during their Super Bowl run is injured and former back-up tackle Trai Essex looks to fill his spot, although reports are he was likely to do so anyway.  The back-up group looked very impressive against the second and third teams of the Cardinals so fans are very excited to see their progress against a top level defense.

Hogs Haven: On the flip side, the Redskins offensive line is a major concern here in Washington. What can we expect from your d-line in your starting defense and backup defensive players who will see the majority of time?

I think the Steelers defensive line is criminally underrated and frequently forgotten about due to the play of the linebackers and Troy Polamalu who tend to overshadow the group.  Casey Hampton, Aaron Smith, and Brett Keisel form probably the best 3-4 defensive line in the NFL and with the addition of first round draft pick Ziggy Hood this season I think this defensive line will help create a lot of chaos for NFL teams including Jason Cambell and company on Saturday.

Hogs Haven: What type of minutes will Big Ben, Charlie Batch, and former Dennis Dixon play? I imagine the former Oregon Duck will see a lot of time. He seemed to impress his first pre-season game.

Mike Tomlin has said the starters will likely play a quarter.  I would expect Charlie Batch to lead them into halftime and Dennis Dixon likely getting the majority of the second half.  Dixon did look good in the first pre-season game, and it really isn't surprising considering he was a Heisman Trophy candidate before his injury his senior season at Oregon.  A lot of media are speculating that Dixon could be a possible "Wildcat" type player but I would be very surprised to see him work out of that type of formation much on Saturday, as he is in the process of proving he can be an NFL drop-back quarterback not a gimmick.

Hogs Haven: Any lesser known players to look out for that you expect to contribute/step-up heavily this year that was not a major contributer on your Super Bowl run last year?

Steelers fans will be looking heavily at undrafted free agent running back Isaac Redman who scored two touchdowns in the Steelers first pre-season game.  Redman is the career rushing leader at Division II Bowie St. and has been very impressive at Steelers training camp this season. The Steelers and their Fans are hoping Redman can provide a goal-line spark that has been missing from the team since Jerome Bettis left to be on Football Night in America.

Other players that Steelers fans will want to keep an eye on are Limas Sweed, Shaun McDonald, and Mike Wallace, who are all battling for the third wide-receiver spot.  It appears second year man out of Texas, Limas Sweed, has the edge and it is his job to lose; but rookie Mike Wallace's speed has been eye-opening so far which isn't surprising considering he was the second fastest man at the Combine behind Darrius Heyward-Bey.  These two players and veteran Shaun McDonald, who led the team in catches and yards during the last preseason game, are all trying to prove they can make an impact on the 2009 Pittsburgh Steelers.

A quick update, Big Ben hurt his foot in practice yesterday and probably will not play Saturday. This is a big shame since I really wanted to see Washington's first defense go against a QB who is so tough to bring down and so great at making the tough plays. A full half of Charlie Batch?? I mean, it will be comical, but I really want to see our guys tested. 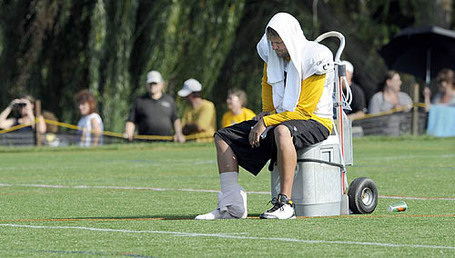