August 1: Our Recap from Training Camp

Share All sharing options for: August 1: Our Recap from Training Camp

I made it over to a sweltering Redskins Park today to catch day three of Redskins practice. They were in pads and were tackling at times. Joe Jacoby and Joe Theismann were on-hand as well.

- Rookie mistakes stood out.
Marko Mitchell dropped an easy ball. Anthony Alridge also dropped an easy pass and fumbled on a hand-off exchange. On the 1-1 drills Kevin Barnes and Doug Dutch got worked over.

- Devin Thomas did not drop a ball all day.

- Santana Moss looks like he is in mid-season form.
(Made a diving catch in the center of the end zone)

The QBs were the only unit that were front and center the entire practice for the crowd. It is crystal clear that Campbell is the best Quarterback of the four out there. And this is not me saying this is a fan or personal preference...it's just a fact after watching them all throw.

- Jason Campbell looked good
(Had a lot of zip on the ball, but had a couple of bad tosses and a couple plays where he held the ball too long. He had a gorgeous 30-yard pass to Todd Yoder, threading the ball through a lunging Laron Landry)

- Todd Collins did not look good today.
(Overthrows and didn't see a blitzer on another play)

Offense spent 15 minutes doing red zone drills. One of which was a corner slant to Malcolm Kelly who was 1-1 with Fred Smoot. Campbell threw a perfect ball, which Kelly went up for but Smoot made an incredible play to break it up. Too bad I didn't hear the audio afterwards on that.

- Chris Horton made an incredible play to break up a pass to Santana.

- Albert Fincher was all over the field. Made multiple plays.

- Keith Eloi and Malcom Kelly both had spectacular catches

As for the lines:

One one play, Renaldo Wynn absolutely barrelled over Mike Williams putting him on his back. The next play Wynn tried a speed move around and Williams had excellent footwork to keep him outside the pocket. So, it's clear Mike is still has a lot of catchup to do regarding the physical part of the game. It was quite impressive however on a running play for Marcus Mason, Mike Williams pushed left and created a running lane the size of I-95.

Haynesworth wasn't in on that play. Speaking of Haynesworth, he was getting double-teamed all the times I saw. He was giving Derrick Dockery fits today.

Chris Wilson stood out multiple times playing left end. His first step off the line ia a blur. He got to the QB real quick.

Orakpo played a few snaps with his hands on the dirt. One play was a run right at him and he bear-hugged the RB immediately. No gain. 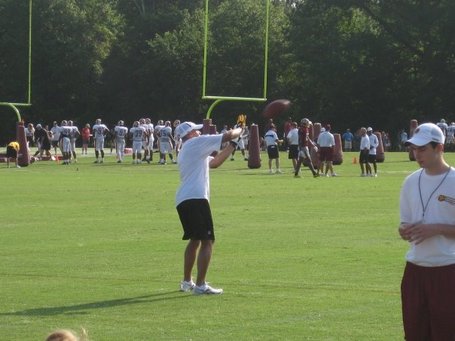 Here's the link to Redskins.com practice notes and quotes:

"The defensive line is wreaking havoc in our backfield right now. We have to block these guys. I'm excited on one hand, and then on the other I want to get going, too." - Coach Zorn

Zorn called the offensive line a "work in progress."

"I've seen some things I've wanted to see, but we're not done yet," he said. "Our guys are working hard and they're going to get better."

He said that while Stephon Heyer is working with the first team offensive line, he has not yet secured the starting job. He won't determine that until after preseason games.

The only real downer of the day is that a bottled water cost $4. In that heat, water is imperative and I was none too happy at those kind of prices. The burgers ($6) and bag of chips ($2) seemed fair, but for $4 a bottled water, I'd almost rather pass out and let the EMS hydrate me for free. There was a single, misting fan available but there was an army of kids hogging enjoying that.