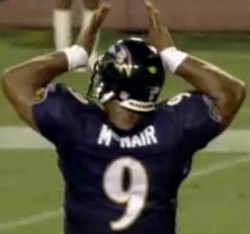 I came across this video on the NFL Network from the pre-season game at Fedex when the Redskins hosted the Ravens on August 25, 2007. The footage is all of McNair, but one thing will stand out heavily when you watch this film.....#21. At the 1:15 mark Sean Taylor came flying through out of nowhere and nearly destroyed McNair. Landry has a nice tackle on Heap as well.

Since it was raining cats and dogs due to issues with the stadium lights, the game was called early in the 3rd quarter. McNair, who played every series but one up to that point, finished 14-for-19 for 98 yards with a TD pass to Derrick Mason. Todd Collins started in this game and had a nice 40-yard pass to Santana. The rain and lights dimming was the real story.

"You go out there in the second half, and the lights went out and you get the thunder in the background," Baltimore receiver Derrick Mason said.

"Football isn't played like this," Washington coach Joe Gibbs said, "going in and out and in and out."

The Redskins Insider has two nice posts from the effects McNair's death is having on Jason Campbell and the effect on Gregg Williams - specifically the flash-backs to the death of Sean.

I feel like I speak for a lot of people when I say McNair was one of those QBs that was a lot of fun to watch. He always seemed to find a way to make something out of nothing, and it's nearly impossible to belittle a player that battled through so many injuries. His pass to Kevin Dyson in Super Bowl XXXIV where Dyson was stopped at the 1-yard still goes down as one of the most exciting NFL plays I've ever seen. RIP Steve.