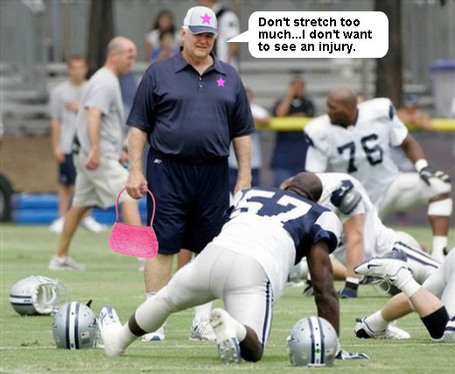 The Cowboys have only had ONE day of training camp, yet fans and media have already slammed the panic button. I'll let the Cowboys' blogger do all the talking:

"We're gonna tackle in the preseason games," said [Wade] Phillips with a straight face. "There's no reason to tackle our own guys. You're more susceptible to injury when you go live."

I thought for sure the Cowboys would show up to camp and get mean and physical. How can you evaluate a player when they can't tackle and hit? Injuries are a part of the game. I think it's more dangerous when you play or practice so as not to get hurt.

2.) Their fearless leader, Tony Romo, is in hiding

"Tony Romo decided not to talk on Day 1 of training camp. Does that bother anyone? I can't recall the starting quarterback ever blowing off the media on the first day...Our leader decides that the best way to usher in a new season is to duck for cover and hide in the locker room while reporters are roaming the ground looking for some words of encouragement for the new season."

3.) Players don't have to be on the field

Something I thought was weird from today's workout, at the beginning it was odd to see several of the Cowboys veterans who aren't involved in the kicking game stay in the locker room until midway through the special-teams portion of practice, after most of the team had already stretched.

Marion Barber chatted with coaches during the opening field goal drills, and Tony Romo, Roy Williams and Patrick Crayton came out later on, and joined the team for a second period of stretching. Strange as it sounds for the acknowledged leader (Romo) to have a different arrival time than most of his teammates, that apparently is how the Cowboys are going to roll.

Now forgive me if I'm wrong, but on day one of training camp doesn't everyone show up at the same time and get some sort of a rallying speech from the head coach, then the defensive coordinator, offensive coordinator and finally a few words from our quarterback?

Yikes. I am I the only one laughing right now? There is nothing better than seeing your biggest rival implode.

I hopped over to the Cowboys official blog to see how they are treating the situation, and they're sugar-coating it, but the hand is creeping toward the panic button:

As was the case the first two camps under Wade Phillips' watch, there won't be much tackling. He'd change his mind about his no-tackling policy during camp if he didn't think his team was tough enough...You folks be nice and don't bring up the Texas Stadium finale in the comments section.

It's way too early to push the panic button regarding Tony Romo's chemistry with coachable WR Roy Williams, but the duo didn't do anything to rave about during the opening practice of training camp. The only live action of the day was a 7-on-7 session in which Romo didn't throw the ball Williams' way. When they were running routes vs. air, Romo was off-target on a few balls to Williams.

We took that month off, so we've got to shake the cobwebs off and get back on track," Williams said. "But today was a good day. It's going to get better."

Some of the Cowboys' fans comments sum it up better than I ever could:

"Wade Phillips is such a joke...It pisses me off that this team will not be tackling. This team was horrible at tackling last year.....especially the end of last year."

"Coach Landry is crying in heaven for the travesty that has beset the team he built."

"Worried about injuries? How'd the philosophy work out last year for you?? Guess what, injuries happen, better that than to completely embarrass yourselves with weak-willed, weak-hearted play with the season on the line. Where do you think the genesis for that style of play comes from? That's right, right now."