Share All sharing options for: 3 Reasons Why a QB Controversy is Coming for the Washington Redskins 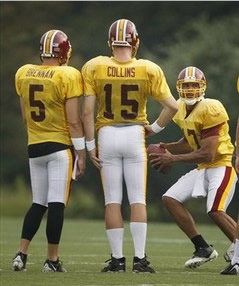 1.) Zorn is not sold on Campbell.
Coach Zorn recently said he 'thinks" Campbell can make the jump in production like Matt Hasselbeck did, but obviously did not go as far to say he's there. With the defense rolling, the front office will not be patient to ride out Jason Campbell through the end of the year. The Jay Cutler and Mark Sanchez fiascos are obvious proof of this.

2.) Colt Brennan vs Todd Collins.
People want to talk about the RT being the #1 competition in training camp. I disagree. Whoever wins the RT spot will be adequate. The REAL battle is for the #2 Quarterback spot. If Colt is the next Jay Cutler gun-slinger this pre-season and wins the job from TC, that brings Campbell's number of games to keep his job down dramatically. I can already imagine the hundreds of forums and blogs headlining "START COLT NOW!!" week three if Campbell has anything less than five total touchdowns (and Colt is #2 on the depth chart).

3.) The fact Colt is playing the majority of the pre-season games.
There is no real reason to sit Campbell. He is still learning this offense and needs competitive field time with Devin Thomas and Malcolm Kelly. In addition, the Redskins added multiple, new offensive lineman. I would think the Redskins' coaching staff would want to give the "starting" offense as much time as possible together to work out all the kinks, especially since Zorn and Campbell said they added another 80 offensive plays over the OTAs. It seems to me that Zorn wants to give Colt as much time as possible to assess his skills and have him ready to play when if Campbell falters.

All that aside. I do feel for Todd Collins. He is the proto-typical Joe Gibbs-like Super Bowl QB. He's not flashy, but he throws a great ball, makes few mistakes, and is smart on the field. #15 jerseys aren't cash machines and since the Redskins are looking for a "long-term" solution, TC really has no chance at ever seeing the #1 spot for consecutive games.

Of course, I don't think the QB controversy will be as epic as the Jay Schroeder vs Doug Williams one, which ESPN ranked #7 of all time [Video]