We continue our Washington Redskins By The (Jersey) Numbers series with a battle of the safeties.

Free Agency has always been a Redskins thing, right? Well, not really. When Joe Gibbs was taking teams to Super Bowls, the most important thing they did was to pursue their own idea of 'team' and use the draft to accomplish the construction of the team. Just prior to his last Super Bowl run, however, the league presented Joe Gibbs with the intriguing opportunity to add an established player or two from other teams to complement what he already had. Plan B free agency was born and with it, a whole new era of player movement. 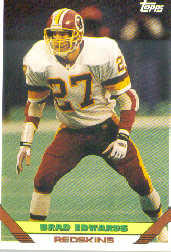 Gibbs picked up Edwards in 1990 under the new Plan B free agency system. The system was a bit different back then. I believe teams could protect their rights to 37 players on their roster. A Plan B player could not sign with a new team without giving his old team the first chance to sign him. The rest of the roster was left unprotected and these players could go out and negotiate contracts with any other team in the league.

In 4 years as a Redskin, Edwards had 13 interceptions. And in the 3 seasons in which he started 16 games for us, he averaged just a hair north of 150 tackles per season. But his performance in Super Bowl XXVI locks him up as our pick at #27. His two interceptions against the Buffalo Bills almost earned him MVP honors. He had 4 tackles, broke up 5 passes and had 56 INT return yards. Instead, Mark Rypien took the MVP trophy home despite the rough start he had that day.

As long as we're talking about that Super Bowl, does anyone remember the halftime show? God I hope not. It was Dorothy Hamill and Brian Boitano. Seriously. The forgettable nature of the show itself is only part of why you don't remember it. CBS broadcast the game and FOX threw up a special episode of In Living Color that coincided exactly with halftime (I even remember the little timer in the bottom corner of the screen.) In a stunning shocker, CBS got crushed in the halftime ratings. I can't believe someone in that boardroom thought that figure skating would be a great idea to hold people's attention during a FOOTBALL telecast. Someone paid attention though. The following year, Michael Jackson was the halftime show. We could spend all day talking about the evolution of Super Bowl halftime shows, but I always thought that the Redskins-Bills clash played an important role in getting us to where we are today. U2, The Rolling Stones, Paul McCartney, Prince, Bruce Springsteen and Tom Petty have all been--in my opinion--great halftime shows, worthy of being during a Super Bowl. Unfortunately, in order to get to these heavy hitters, we had to suffer through the late 90's, when network execs would collect a random collection of pop artists, throw together a hastily choreographed collaboration and voila!...craptasticness ensued.

Sooooooo....I guess in addition to Brad Edwards being a pretty serviceable safety, he also gets an assist for making Super Bowl halftime watchable?

P.S. Someone please correct me if I am wrong, but I don't think Brian Boitano and Dorothy Hamill even skated on actual ice.