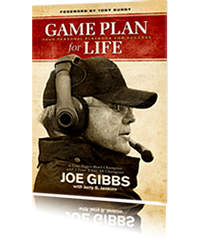 Coach Gibbs just finished a chat with ESPN promoting his new book, Game Plan For Life. I highly recommend reading the first chapter as it gave me chills. Correction, THE FIRST SENTENCE did. My first reaction of a Coach Gibbs book was loving Jebus Jesus and all that preacher stuff. I was certainly surprised to read this line (later in the chapter), which definitely makes me want to read more:

Sean Taylor's death made me realize how fragile life can be. George Tharel's [ex-coach that mentored Gibbs] life made me recognize the lasting impact our influence can have on others. As I thought about these two lives, I evaluated the kind of impact I was having on other men. With this book and the project that will follow, I want to pass on some of the truths I've learned and the most important discoveries I've made about life. I hope it will help you avoid some of the mistakes I've made too.

I mean, what an intro to book. Tapping into the Sean Taylor emotion is certainly not something enjoy. Sean no doubt is dear to every Redskins' fan's heart, so in that sense, this book should do well. Coach then goes into the comparison as life being a game, God is the Head Coach, and the playbook is....wait for it...the Bible, and although he did not state it out-right, I'm assuming the championship is Heaven. I personally don't like to have religion forced on me, but this book doesn't appear to take that angle. I was raised in Catholic schools from grade school through college. I certainly get it, though I take it with a grain of salt. Christianity aside, there is a lot of valuable lessons to be learned through the Bible, and I feel the same could be said about Coach Gibbs' book. I will give it a read because I have found that the people that come out on top are the ones who take major risks and have failed before (Richard Branson). The famous quote "You haven't failed until you've quit trying" comes to mind.

Here's are some quotes from Gibbs chat today and his upcoming appearances in the DC Area:

Question: Coach, how much research did you have to do to come up with the ideas for your book on how to live successfully?
Gibbs: We did a lot of research and we had a committee working on it. We had the idea of going out into America with a research firm and find out what America needed to live a successful life.

Question: Joe, how do you feel about veteran players like Favre basically telling coaches year after year they do not want to participate in mini camps and preseason games?
Gibbs: I think any player at the professional level should have an obligation to do what the team asks him. A big part of the training at the NFL level takes place in the off-season, not when you come into camp. A player that doesn't participate makes the risk of coming into camp out of shape and getting hurt.

Question: Coach Gibbs, how come the '85 Bears didn't win more than one Super Bowl?
Gibbs: I apologize for knocking them out of the playoffs that one year. That's probably one of the best games we played in a long time, knocking them out. That's just one of those things in the NFL, it's hard to put together a number of Super Bowl appearances. All it takes is one injury and one bad play. Everyone in the NFL is so close in the competition now. It's extremely hard to win a Super Bowl.

Question: Coach, where did you come up with the idea for your new book?
Gibbs: As I thought about life, I came to the conclusion that life is a game. You and I are the players. God's our head coach and he wouldn't put us here without a great game plan. It's His word. During my years, when I veered away from his game plan, the Bible, I met real adversity. That's my story in the book. Also the book details the 11 most important topics that America says they need to have victory in to live a successful life.

Here's is Gibbs video of him reciting his upcoming appearances for the book, and naturally, wants you to pray for him. Upcoming book signings in the DMV area include:

Book Release from Game Plan For Life on Vimeo.