You asked for fantasy football talk, you got it. Before we get into pre-season and start overloading on league-wide fantasy talk, let's rank the Redskins fantasy players. We'll assume that the defense and special teams are one unit (DST), and we'll assume individual players get credit for any return yards and touchdowns. 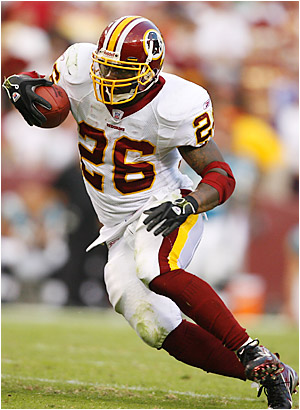 1. Clinton Portis, RB- The offense still revolves around the run here in D.C., and Clinton  remains an elite athlete in the NFL, capable of dominating an opposing defense with 25-30 quality touches in a game. While he is not injury-prone, his fantasy owners have had their share of heartbreakers the last few seasons. What makes him the top fantasy player on this team is that you know he is going to get the ball, and you know he is going to be featured--i.e. there is no 'running back by committee' here. I continue to hope for more receptions out of the backfield for CP, but if he stays healthy for a full season, 1,500 rushing yards and 10 TDs are very likely.

2. Santana Moss, WR - Santana Clause is an ironic nickname we have for Moss. Ironic because he starts out the year like gangbusters but then opposing defenses shut him down before we get to Christmas. This is of course not his fault, and should the Redskins develop an alternate threat to Santana, other teams will be forced to play him a lot more honestly. Last year in my fantasy league, which holds an auction draft, I picked Moss up for $3. In fact, most would say I got stuck with him at $3, as I was really bidding value at that point. I was shocked when he went so cheap. I think this is the perception Moss is facing now based on the last few seasons of going missing in the winter. The Redskins passing offense has been rather anemic and he has paid the price. Rounding out his value though is the threat that the Redskins will incorporate him more into the return game. He has shown how dangerous he can be back there, and if your league gives you points for return yards and touchdowns, he is definitely a top-tier fantasy receiver.

3. Chris Cooley, TE- If fumbles kill you in your league, then Cooley hurt you last season. But I would be hard-pressed to think a player like Cooley will let that kind of thing happen two years in a row. He continues to be one of the top tight ends in the whole league (83 catches last year), and Jason Campbell continues to rely on him heavily when we need to get a first down (averaged over 10 yards a catch). Because we don't feature two or even three first-tier wide receivers, Cooley's status in our passing game remains high. He is a big target and he understands how to find the pocket in the middle of the field. The big question for Cooley--and the Redskins--is how can the team do a better job of finding him in the red zone. He only hauled in 1 TD last season (which is a problem) but he averaged 7 TD's the first four seasons, so you have to hope this is an aberration, and still consider him on the same level as Jason Witten, Dustin Keller, Greg Olsen, etc.

T4. Washington DST - A lot of fantasy leagues really let a good defensive unit pile on points. In the league I play in though, defenses can either be the top scorer of the week, or can go negative enough to completely erase your top scorer of the week. All of this makes the top DST units in the league that much more valuable. The Redskins added Albert Haynesworth, Brian Orakpo, Philip Daniels, Renaldo Wynn, and Jeremy Jarmon  to their pass rush/defensive line. We lost Shawn Springs, but have a pretty good secondary with Horton, Landry, Hall, Rogers and Smoot. There is plenty to suggest this defense can build on what they accomplished last season, which saw them finish as the 4th-ranked unit in the NFL. From a fantasy perspective, the improvement would have to come in the way of increased sacks and turnovers. If that happens, this DST will be the difference-maker come playoff time, in fantasy and in reality. 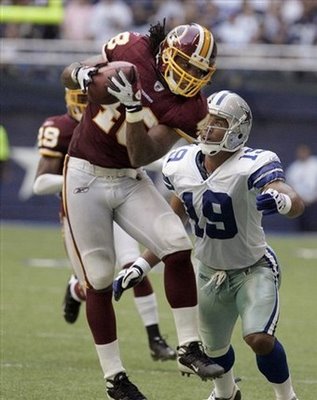 T4. Jason Campbell, QB- Typically, QB's are the money makers on fantasy teams. Assuming most leagues run about 12 teams deep, it would be fair to say that you would hit 12 other QB's that are more likely to fill up a stat sheet before you came to JC. To me, this makes him a great value draft pick. You can pick up a few other players you need in the initial rounds and pick him up as a backup to your starter late in the draft. His yards and TDs are low, I'll grant you. The upside on him this year is tough to argue though. He is in a contract year, in the second season under Jim Zorn, and by all accounts in a better comfort zone in the current offensive scheme. This offense is definitely more naturally pass-happy than we showed it to be last year. For us to get the points on the board that we need to win games--roughly 24 points per game--JC will need to do things that will make fantasy owners very happy. He is a top-tier second string fantasy QB in my opinion--a starter who will be asked to throw the ball relatively often, supported by a strong running game.

6. Ladell Betts, RB- Fantasy owners have gotten to know Betts over the last few years. When he took over for Clinton a few years back down the stretch, he put up 1,000 yards on the ground in 9 weeks. He is a fresh back, with little wear and tear on the tires. But because of the carries that Portis gets, Betts' value is very low in the beginning of the season. If you draft Portis, you pretty much HAVE to get Betts since if anything happened to Portis, you know they would look to Ladell to carry the ball 25 times a game.

7. Devin Thomas, WR- I continue to bet heavily on Devin. He is the kind of athlete that when he has the ball in his hands, anything can happen. But in fantasy terms, from here on out on this list we are talking about depth and backups. Based on his improvement at the end of last season, it is not inconceivable that he could make a move in training camp this summer and give Randle-El a run for his money at the #2 spot.

8. Fred Davis, TE - Again, most fantasy teams don't have 2 tight ends stashed away, and 2nd-stringers are even farther from the average fantasy owner's mind. But Fred Davis is an interesting thought...there probably isn't anyone on this list with more upside than Sleepy. He will not be inactive on many Sundays this season. Zorn likes using two tight ends, and if Davis is on the field, defenses are going to have to make some choices regarding who they want to defend. My guess is that Fred Davis won't get drafted by many owners, but could be one of those guys that is the "Most Added Free Agent" in Week 6 when he blows up against the Chiefs. 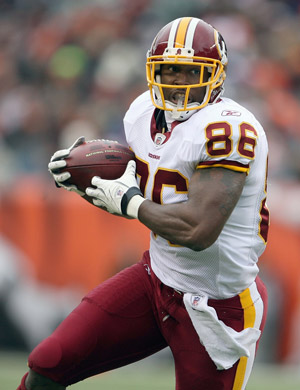 9. Malcolm Kelly, WR- He continues to be the player that gets the most positive praise from other players when we ask, "Who do you think is in line for a big year?" He has an "ooooh" factor that makes him a quality sleeper in fantasy leagues. But with next to nothing to show for his rookie campaign, and a knee that is unproven in the pros, he is in a deep, deep sleep indeed. We'll call him our "Ambien snoozer" for the upcoming season.

10. Antwaan Randle-El, WR - You hate to list a #2 receiver this low, but on this team, the writing on the wall says that the youngsters are going to get every opportunity to supplant ARE in the starting lineup. Things could change of course as we get closer to September. But as of right now, his fantasy value is at its lowest. Our passing offense is pretty much Moss and Cooley right now, with the best chances for adding onto those two guys resting on the potential of the second-year guys.

11. Colt Brennan, QB- There is always a guy in your league that is not afraid to stash a 2nd or 3rd string QB on his bench. The truth is that every year, at the end of the season, you find an NFL team or two is trotting out a young gun to get some minutes. And that is prime time fantasy playoffs action. Some of you out there must have a story of how some random quarterback either saved or ruined your season. Colt Brennan won't be drafted in many leagues on draft night. But if JC goes down--God forbid--the temptation to play Colt will be great. And you can bet if he is playing on Sunday, there will be a fantasy team or two out there starting him with the thought that he could be blow up for a huge and random fantasy performance.Given all the uncertainty at the QB position in D.C. lately, owning the young gun doesn't seem like that crazy of an idea. 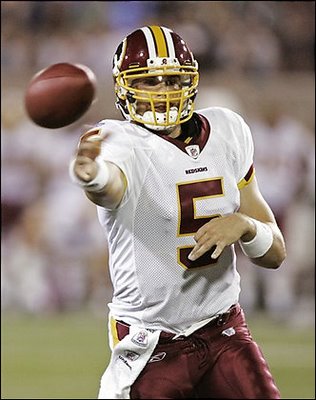 There are a few more guys we could throw on this list: Mike Sellers, Roydell Williams, Todd Collins, Todd Yoder--actually, not Todd Yoder. Sorry Todd. What would you change about this list and what do you hope for from the Redskins players on your fantasy teams?