Share All sharing options for: Playoffs?!? You Want To Talk About Playoffs?!? - Part One: AFC

I do want to talk about playoffs, Jim. The Baseball All-Star break is when I like to make my off-season NFL playoff predictions. Speaking of the mid-summer classic, can we just take a second and take note of the Home Run Derby? Was anyone else bored to tears? One contestant, Nelson Cruz, went 3 hours between swings. Things I could do in that time:

2) Have 879 meaningful conversations with friends of mine
Me: "Dude."
Friend: "You too, dude."

3) Decide to get serious about dieting and exercise

5) Scrap my new healthy outlook in favor of adding hot fudge, brownies and whipped cream to my "Organic" ice cream.

6) Piss off my wife no less than a dozen times
Wife: "What kind of game is this? Is the guy throwing the pitches trying to throw it hard? Why is that big net in front of the pitcher? And what is with all the kids on the field? Can't they get seriously injured? Why is that guy wiping the other guy's sweat off of his head?"
Me: "I'm sorry, did you just ask me a question?"

Let's start with the AFC. Keep in mind that the only thing more foolish than picking playoff teams right now is picking the order in which they will qualify (i.e. who has home-field advantage). OK, that's a lie...there are plenty of more foolish things and I have engaged in a good number of them, but for the purpose of this article, please treat the six teams from each conference as equal. If it helps, think of each team as a moderately attractive, disease-free girl that--after a few adult beverages--is indistinguishable from the group. You would be happy to take one home and would most likely consider beginning a potentially life-ruining relationship with any of them. We start with the favorites after the jump..

Indianapolis: The loss of two coaches this off-season (offensive coordinator Tom Moore and offensive line coach Howard Mudd, click here for an older article talking about it) would be a bigger deal if they weren't going to be around at all. But it is possible/likely that they will assume "consultant" roles, offering a little bit of transition insurance. Besides, Peyton Manning is pretty much the de facto offensive coordinator anyway, right? Who is going to come in there and tell him how to run that offense? The last time I checked they weren't interviewing Steve Spurrier as the new offensive line coach, so they will probably have at least some quality pass protection in the game plan each week. Reggie Wayne and Anthony Gonzalez are top-notch wide receivers, and Dallas Clark continues to be a first-class pass-catching tight end. The offensive line continues to be anchored by one of the best centers in the league--Jeff Saturday--and the running back position is as solid as ever with Joseph Addai and rookie Donald Brown. On defense, they continue to boast a potent pass rush and with Bob Sanders on the field, they have a secondary with some bite.

Pittsburgh: I am not picking this team to win their division (see below), but I am picking them as a favorite to make the playoffs, because they just always seem to get there. I like their coach, Mike Tomlin, because he really seems to get the most out of his team and always appears to be in control of both himself and his sideline. His job is made easier by the presence of some veteran leadership on the field that often becomes the difference (in their favor of course) in close games. The defense plays an intense brand of football, led by Troy Polamalu and James Harrison. On offense, one could make the argument that Big Ben is to blame for at least half the times he is sacked, or that he can morph into Brett Favre sometimes and make bad decisions with the ball. But I am a firm believer that the most important stat for NFL quarterbacks is wins. He holds the career record as a starting QB in Pittsburgh franchise history, with a 59-22 record (.728 winning percentage). And he holds the NFL record for most wins as a starting quarterback in the first five seasons (regular season only) with 51 from 2004-2008. Predicting this team will go to the playoffs is like predicting Leonardo DiCaprio will bang a supermodel.

Tennessee: Jeff Fisher is just about as lock-solid of a coach as there is in the league. He is entering his 14th season as the head coach of the Tennessee Titans franchise, holding the current mantle of longest tenured coach with one team among active coaches. His 120 wins there is a franchise record and his five playoff appearances over the last nine seasons is better than all but five teams in the whole league. With all due respect to the Steelers and Ravens, I think it is Jeff Fisher who molds the toughest team in the league each year. They know who they are (I usually hate it when people say this kind of thing, but this team embraces its identity on offense and defense) and the coach gets the credit for that. He has a keen awareness of what it takes to win, and he is not afraid to make a decision in pursuit of winning--like benching the young but unstable Vince Young in favor of the old and decrepit (yet sober) Kerry Collins, or dealing with the debacle of Pacman Jones. It doesn't hurt that his roster is plenty talented and that he is able to trot out a very special player in Chris Johnson in the backfield. Finally, he rocks a killer 'stache. Respect. 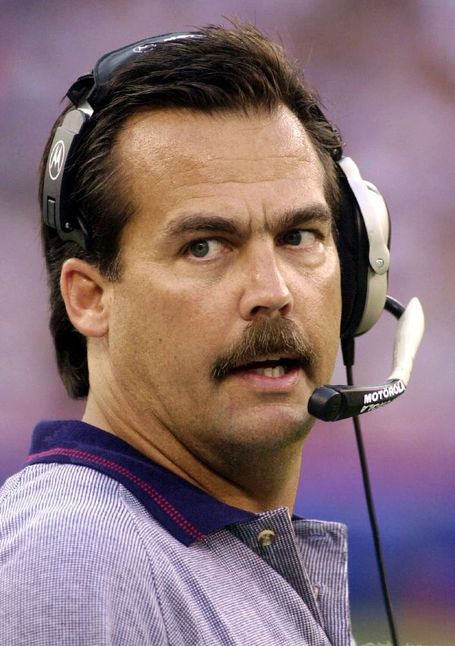 New England: You could argue that this team belongs in the Favorite category, but we might as well face the fact that this team is extremely well-coached (for anyone still in denial.) Bill Belichick has complied a 102-42 record in nine regular seasons. His Patriots teams are 14-3 in the playoffs and 3-1 in the Super Bowl. They only missed the playoffs last year on a tiebreaker, sitting home despite their 11-5 record. I don't see them going back-to-back seasons watching the postseason on TV. Tom Brady is back. Randy Moss and Wes Welker are basically unstoppable and their stable of running backs might be the envy of the league (seriously, read this list: Laurence Maroney, Fred Taylor, Sammy Morris, Kevin Faulk, BenJarvus Green-Ellis, Patrick Pass). I personally like Green-Ellis and Pass a lot and chances are they may not even need them--until the playoffs. Does this remind you of another coach who always seemed to have some fresh legs for the postseason? Does Timmy Smith ring any bells? Belichick could lean on this group of running backs all the way to Miami this year. And the stupid part is that this offense is pretty much going to be based on Tom Brady airing it out to Moss, Welker and Ben Watson. And the rich get richer.

San Diego: I simply can't stomach Norv Turner on TV in late December and January, but someone has to go to the playoffs from the AFC West. And come on...this roster should have gotten 14 wins last season. The Chargers are capable of it again this year. Norv will figure out a way to knock that down to 9 or 10...which will be good enough to win that division me thinks. God do I want to pick Kansas City here. Give Scott Pioli and the Todd Haley/Matt Cassell combo another year and time to grow and this team should be able to make some noise.

This leaves my two surprise teams duking it out for the last spot.

Houston: TheTexans are a trendy pick this off-season I know. And they have let down a lot of prognosticators the last year or two after being picked to climb up from the cellar of the AFC. This year, I am a believer. I like what Gary Kubiak is doing down there on offense. Andre Johnson is probably the best wide receiver in the league, with all respect to Larry Fitzgerald. The dude can straight up dominate a game. This is despite teams doing everything in their power to keep Matt Schaub from getting him the ball (when Schaub is healthy, which he will be again at the outset of this season.) Steve Slaton and Chris Brown are more than serviceable in the backfield and they have quietly assembled a very sturdy offensive line. What I am really basing this pick on is defense though. I am going all in with these guys. I love their defensive line, with Mario Williams quickly becoming the class of his position. Their linebacking corps should be fast and mean, with DeMeco Ryans proving to be a force in the middle. Brian Cushing will start right away and Xavier Adibi looks set to hold down the other OLB spot. They also have Cato June and Buster Davis in the fold, giving them a formidable group. If the secondary can hold its own, they should get to playoffs for the first time...ever.

Cincinnati: I actually like this team to win the AFC North. From 4-11 to the division crown in the following year you ask? That is my bold prediction for the AFC (which really turns the wild-card race into a Houston vs. Pittsburgh competition then doesn't it?) If Carson Palmer can return to form--and it says here that he will--then this team will score plenty of points, and they will be able to do it against the defenses in their division and the rest of the AFC. Ocho Cinco and Lav Coles are a better than average WR duo and Chase Coffman could end up being the breakout rookie receiver this season (albeit at the tight end spot.) In Marvin Lewis, they have a defensive-minded coach that seems to be getting more comfortable with the personnel he has collected the last few years. It is a young group, featuring the return from season-ending injuries last year of Keith Rivers at OLB, and Johnathan Joseph at CB. Leon Hall has fallen into the trappings of being a Bengal, recently avoiding jail time in a drunken driving case by pleading to a reduced charge, but he is a very gifted young corner, and will factor into that defense this season in a major way--after whatever discipline comes his way from the Commissionator, Roger Goodell. Leap-frogging Pittsburgh and Baltimore is a daunting task, but I figure something like that happens every season, so I will pin my soothsaying reputation to the Bengals.

Come back tomorrow for the NFC playoff predictions.