Update 7/27/2009: He did it!!! Mike Williams was on Redskins Nation today where he confirmed he is currently 343 pounds...2 pounds UNDER his goal of 345 pounds with a few days to spare. A couple of interesting facts:

Congrats Mike! The only issue left is can he catch up with the speed of the NFL being out of the league multiple years. The good news is he'll be training against one of the best DL's in the league. 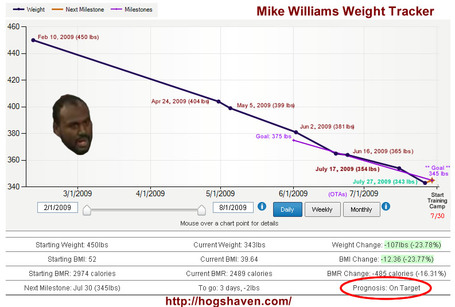 Update 7/17/2009: As reported by Gary Fitzgerald of Redskins.com, Vinny Cerrato was on ESPN 980 last Thursday and said Mike Williams weight is down to 354. That leaves 9 pounds to lose in 10 days. Good job Mike. Incredible work. Hold all tickets...it's going to be a photo finish.

Update 6/19/2009: We've updated the chart with Mike Williams' latest weigh in. Over the last two weeks Mike has caught up to where he needs to be. He's currently in Arizona training, and with that 100 degree heat, he may just show up to camp unrecognizable.

Original Post: I thought it would be beneficial to graphically track Mike Williams weight as the race to training camp starts using a handy web app from WeightChart.com. Combing the news sites, I have been able to piece together Mike's starting weight, progressive weights, and his ultimate milestone goals for OTAs and training camp. He was 6 pounds over-weight for his June 1st milestone, but nevertheless, he still came close. I'll keep updating this as we approach training camp.