Are We Kidding Ourselves That the Redskins Offensive Line Is OK?

Share All sharing options for: Are We Kidding Ourselves That the Redskins Offensive Line Is OK?

The Redskins' coaching staff appears happy with the current state of the offensive line. Should we be so happy? I found a couple interesting bits that bring me back to reality from this la-la land that everything is glorious. The Redskins currently carry fewer lineman on their roster than all the teams that already have solid lines! That seems odd to me. Shouldn't a team that has a weak offensive line have MORE players on their roster to a.) force competition, and b.) have a larger pool of players to select from? I mean, the Redskins currently don't have a full roster anyway.  Why not have more guys competing?

The Skins recently cut Jon Jansen to get to 14. In 2008, the Redskins carried 10 offensive lineman on their 53-man roster. The 6 shoe-ins are Heyer, Samuels, Dockery, Thomas, Rabach and Rinehart. So, that leaves approximately 4 spots for 8 guys. So let's break down the competition among the 8 guys and assess the talent. I suddenly get nervous when I think of these guys having to back up our starters should a likely sudden injury occur.

D'Anthony Batiste* - Undrafted free-agent first signed by the Cowboys and sent to the practice squad. The Carolina Panthers singed him in 2006, but he never saw any action. The Falcons signed him in 2007 where he started 4 games, but he did not make the team in 2008. The Skins signed him in December of 2008.

Devin Clark - Signed by the Skins as undrafted free agent in 2008 after playing college ball at New Mexico. He saw limited action in 2 games last year.

Will Montgomery* - Drafted in the 7th round out of Virginia Tech by the Carolina Panthers. He was eventually signed as an unrestricted free agent by the Skins in December of 2008. He started 4 games for the Panthers and 2 for the Jets.

Reuben Riley* - Undrafted free agent out of the University of Michigan. Signed and released by the Panthers two times with a stint in Miami where he was also signed and released. He has not seen any game time. He spent the final three weeks of the 2008 season on the Redskins' practice squad.

Mike Williams - 4th overall pick in the 2002 draft by the Buffalo Bills.  A five-year NFL veteran, Williams spent four seasons in Buffalo (2002-05), playing in 51 games with 47 starts. He also spent time with the Jacksonville Jaguars in 2006. He has been out of the league for 2+ years and is racing to lose weight in order to get into playing shape.

Scott Burley - Rookie who played left and right tackle for the Terps as a two-year starter. He was signed by the Skins in April of 2009.

Jeremy Bridges - Drafted in the 6th round of the 2003 draft by the Eagles. In his career, he has played right tackle, right guard, and left guard and has played in 62 games in his 6 year career (starting in 39 of them). He has had 2 off-field problems with the law, one as recent as December as 2008.

Edwin Williams - Stand-out Center for the Maryland Terrapins signed by the Skins this April as an unrestricted free agent. Edwin was a 3-year starter for the Terps winning multiple awards. He grew up a Redskins' fan and is well aware of the 'Hogs.' The Terps ran a very similar system to Zorn's offense, so Edwin's learning curve has been easier during mini camp and OTAs.

If you notice the asterisk next to the names, those are all players that the Redskins signed in December of 2008 when the offensive line was running on fumes. I can't imagine the OL talent pool was very strong in December of 2008 as the playoffs were approaching, but alas, these are 3 of the 8 lineman competing for a spot. Mike Williams is a long shot given his weight and 2 years removed from the league. Jeremy Bridges looks to be a versatile competitor, so that leaves the rest...undrafted free agent rookies. SHEESH.

Half of the Redskins' schedule is against the NFC East, which has the best defensive lines in the league. Dallas led the league with 59 sacks, Eagles were 3rd with 48 sacks, and the Giants were 6th with 42 sacks. Oh, and now Osi Umenyiora is 100%. Adding Derrick Dockery no doubt helps, but does it put the Redskins in a position to improve greatly on offense? No. Quick..how many points did the Redskins score for all 6 games against the NFC East last year?

83 points!  A cool 13.8 points per game average. How does everyone feel now about the O-line depth? All of the articles I've read since the draft have been how much the fans "hope" the young guys can step up. Wonderful. Joe Bugel has the fans on the Obama "HOPE" plan. Unfortunately, I don't see a lot of change coming from this plan. Seems to me when you have a defense built to win championships, Clinton Portis in his prime, a solid WR core, "hope" should not be the word to describe one of (if not THE) most important components of the team, the offensive line. 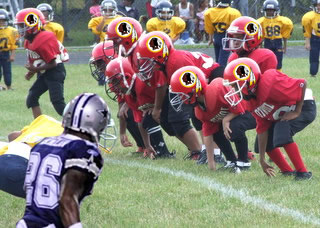