After falsely starting rumors Laron Landry wanted to be traded, now Mike Florio from PFT says Dan Snyder is going after Brett Favre. [junkies]
(Enough is enough with Florio...I hope you're happy with your purchase NBC)

Chris Cooley's camp a success, sets the bar for this season [Fairfax Conn]

Cooley even admitted that Redskins coach Jim Zorn guaranteed him seven touchdowns this season during a recent practice.

"I feel it's only right, being blessed to be able to play in the NFL, to give back to these kids. I know in Oakland there are a lot of kids that don't have a good foundation or have someone they can look up to. I'm just trying to allow people to see that you can be successful coming out of Oakland."

Redskins Insider breaks down the Pro and Cons of Brandon Marshall [Insider]
I stopped reading when I got to the Con: "Marshall faces a trial this summer"

And doing my normal routine for the Slop, I noticed Google had a pretty substantial FAIL today: 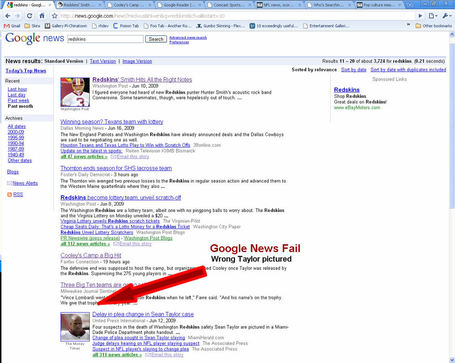