Washington Redskins By the Numbers: #21 - Sean Taylor, Why We Say "We" (Interview Larry Coker)

Share All sharing options for: Washington Redskins By the Numbers: #21 - Sean Taylor, Why We Say "We" (Interview Larry Coker)

We are a fifth of the way through the list and we made it to a number near and dear to all of our hearts. 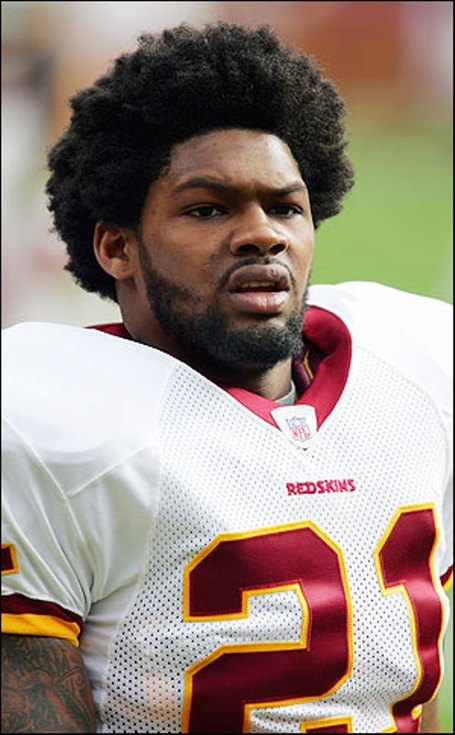 We have featured other players who spent relatively short stretches as a Redskin. But no one like this one. To be upfront, I have to say that Sean Taylor quickly became my favorite player after he was drafted, and like any fan of a player on their favorite team, I found it insanely easy to overlook things that may have turned off other fans. I know Kevin felt the same way immediately.

Kevin had the chance last week to speak with Taylor's college coach, Larry Coker. Here is that interview:

KevinE: I see that you and Sean both started at in 2001. What about Sean stood out to you when you first saw him? Did you recruit him?

Larry Coker: Yea, I recruited Sean. His physical presence, his size and his speed. Sean Taylor could have played safety, linebacker, or running back at the . He was just a great talent. He did everything. He went to a small private high school [Gulliver] and did everything: returned kicks, punts, was running back, and was a defensive player. He was like a throw back player that you just play all the time.

KevinE: I noticed you have a Masters in guidance counseling, was there ever a time you applied those skills with Sean?

Larry Coker: Sean is like any of them. It's a transition process. Sean was always respectful. He knew his limits and certain guidelines we had to go by and he respected that...sometimes he'd push it to the limits but that was expected sometimes by some of the great players.

Larry Coker: We had one Thursday practice where we were getting ready to go up to and play . Sean was having a bad practice, and I didn’t feel like he was giving a great effort, so I called the team together. I said, 'Sean, you need to pick it up. I'm not taking you to . I'm leaving you at home.' It was an intense little discussion on Thursday. We finished it up and had a good practice. You know, you might want to look this up, I think he had 3 interceptions and returned one for a touchdown. He did about five things; he really won the game. Some of the coaches were saying, "Coach, I'm really glad you brought Sean today." It was a great head coaching decision on my part [laughing]. I hope you can find the stats on that because it was a phenomenal day. It rained the entire day in . It was a game we weren't suppose to win. We had lost our starting running back [Frank Gore] the week before. We were pretty heavy underdogs in . Sean went out and won the game for us.

KevinE: Was it difficult getting him to come to ?

KevinE: I had heard the story Gregg Williams stood on the table demanding the Skins draft Sean Taylor. Did the Redskins contact you before drafting Sean?

Larry Coker: Heck, I was doing that too. The Redskins knew what type of player they wanted and they got him. 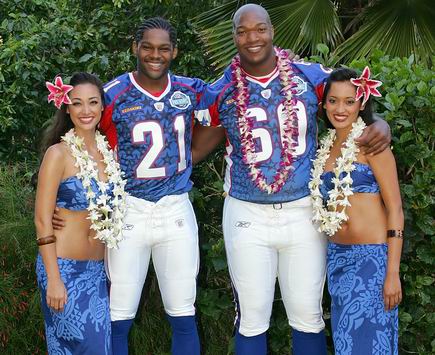 Part of what endeared Sean Taylor to so many Redskins' fans in such a relatively short time was the journey he managed to cram into four seasons--both on and off the field. And you can't tell that story without mentioning where that journey started. As a rookie, Taylor landed in trouble with the league for skipping out of the Rookie Symposium. He was pulled over and arrested for an alleged DUI following a Rod Gardner birthday party in October 2004. We opened the paper before the 2005 season to read that he wasn't returning Joe Gibbs' phone calls, and he had a protracted ordeal with the Miami-Dade County Police in a case involving firearms. He was fined by the league numerous times for uniform infractions, late hits, etc.

A less talented player may have very well been washed out of the "League" for a laundry list like this one. But this was "Meast", half-man, half-beast. It didn't take long for his hitting prowess to draw the attention of opposing offenses and his ability to be around the ball and to be a factor in most plays raised the eyebrow of even the casual fan. His rare combination of speed, power, nasty streak, and most of all, the results on the field all worked on the hearts and minds of the Redskins' faithful.

Gregg Williams had this to say on that:

Early in his career we used to laugh after the fact and rant after the fact. It could be frustrating to coaches when he would abort his responsibilities in the defense because of his instinctive knowledge of where the ball was going and he'd go get the ball and it would not be his responsibility to make that play, but he would still make that play. I would be angry and get after him about violating the defense and not playing it the way it was, but I'd have to shake my head, because he also knew where the ball was going and he was right in most situations.

His close relationship with Gregg Williams seemed to be having a tangible effect on and off the field. There was a real bond shared by the Williams' family and Sean Taylor. And then Sean began his own family. 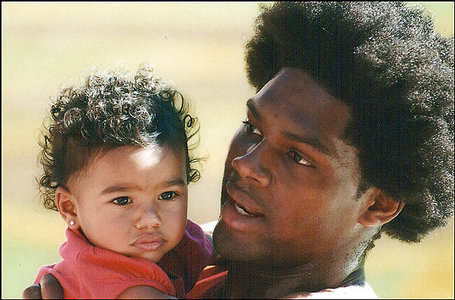 via 4.bp.blogspot.com (Photo courtesy of Kirt and Tammy Dale)

By most accounts, the birth of his daughter Jackie contributed more than anything to Sean's maturity. Between the whistles on Sundays and on the practice field during the week, Taylor was attacking his profession in a way that showed pretty much everyone that he realized he was a special player, and that he was taking very seriously his chance at becoming a truly great player. Though he still kept mostly to himself publicly, it wasn't odd to hear another player talk about the smile Taylor wore that seemed to show his teammates that he was in fact growing up and enjoying something in life that had previously eluded him.

Premiere talent with obvious upside steps onto the stage. Troubled youngster struggles with professional demands in the harsh face of stardom (thank you Lester Bangs.) Blossoming superstar shows signs of "getting it." Young man appears to be in control of life, profession, direction. Bright future extinguished in cowardly act. All in barely four years.

Casual fans of the team, and fans from other teams around the league and in other sports have asked me, "When will it be enough? When will you [guys] let it go?" I explain to them that they are making a fundamental error in their assessment. You see, the whole Sean Taylor thing is not about some inability to let go of someone who left us far too early. It is the refusal to give up on the spirit of a player who embodied so many things that we wish were more prevalent in the game today. Nobody seemed to want it more than Sean when he was on the field. Was he an angel? No. But he was figuring it out, and at 24 years old, what else is there to be doing? And he went after it all the way up to the whistle, and then to the echo of the whistle. He was learning how to get the most out of his abilities, and he was leading his teammates to the same end.

It is fitting that in previous posts this week, a commenter (an Eagles commenter I believe) called out another for using the term "we" when speaking about our team. Everyone is of course entitled to their opinion. But I strenuously object to those who continuously come down on fans for using the term "we" with their inevitable asking of the question, "When were you a player on that team?"

I don't even respond to that with the old "We pay their salaries" line. While true, money is not why I believe in the royal "we" on this one. What is more constant in the grand equation here? Fans or players? For many, you are born into a family that has been emotionally supporting a team long before you got there. You are taught to be a fan. You learn how to be a fan. You grow as a fan. You pass it on to your own kids. Players come and go. But without the emotional investment of a fanbase the world of sports as we know it simply would not exist. And without players like Sean Taylor who combine their God-given talents with distinct and indisputable effort, the willingness of troubled souls in troubled times to invest themselves emotionally in sports would be nonexistent. You put all that together and that is why I will always say, "we", why I firmly believe in "we", and why I will never agree with--for example--Andy Pollen and his non-"we" saying philosophy.

Here is the newest member of the "we" family--keep in mind, he knew how to pay his respect to Sean prior to the conception of this article: 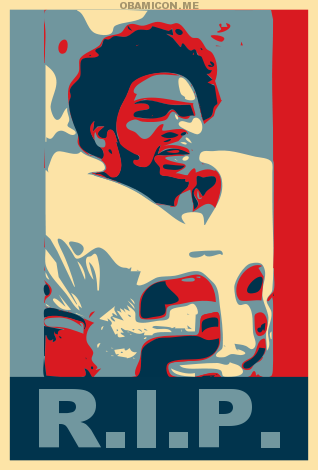 Regarding the Miami versus Florida State game that Coach Coker spoke of, it was played on October 11, 2003. Miami forced FIVE turnovers that game, which propelled them to a 22-14 win over FSU. Sean actually had two interceptions, returning one for a 50-yard touchdown, hurdling a FSU player as he jetted down the sideline. Typical Sean Taylor.

"Not a lot of people actually gave us much of a chance. It just says a lot about our character."

This is a quote I'd normally read and think nothing of, but now knowing the story behind practice, it really did say a lot about the team's character, especially Sean's. Sean Taylor Game Stats:

Unfortunately there is not a stat for tackles made, but I can guarantee Sean was high on the board with those. We'd like to thank Coach Coker for taking the time to talk to Hogs Haven. He is now the head coach at the University of Texas at San Antonio. He gave us a sincere message to pass on his best to all the U players, specifically CP, Rocky, and Santana. We wish Coach the best in the upcoming season.