Daily Slop: Bruce gets a Taste of Ray Lewis

Share All sharing options for: Daily Slop: Bruce gets a Taste of Ray Lewis

Mottram Bros doing a throw off with Cooley Bros [Mr Irrelevant]
(They're soliciting ideas. Hogs Haven suggests you have a dunk take 35 yards away with Vinny Cerrato on it.....first team to dunk him wins. Anyone else got any ideas?)

Ocho-Stinko to live with Carson Palmer in July [espn]
(Am I the only one that still sees Cincy being a disaster this year?)

Father's Day this Sunday. Some solid Skins gear and 3-day shipping [FballFanatics]
(Not gonna hide the fact Hogs Haven gets a cut of sales)

So the pictures are finally in from the SB Nation Ravens' blogger who lost the NCAA tournament bet with Hogs Haven. We sent him an Adam Archuleta jersey to wear to work. He decided to take pics of Ray Lewis "giving it" to Archuleta, and then he took a picture of the jersey under a toilet seat. I tend to see the pics a different way. In the first picture, it looks like Ray-Ray is giving it to him from behind, and the second picture looks like he is pleasuring the Linebacker. Nice work Bruce, you're officially on the Internet!!! Hopefully future job employers don't do a google images search for you. haha. 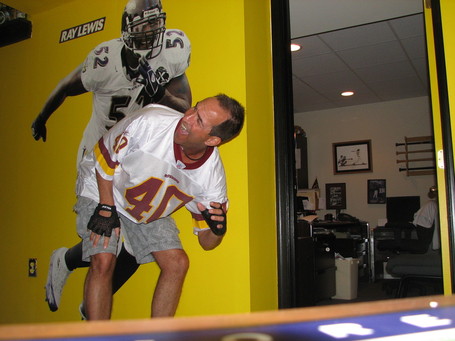 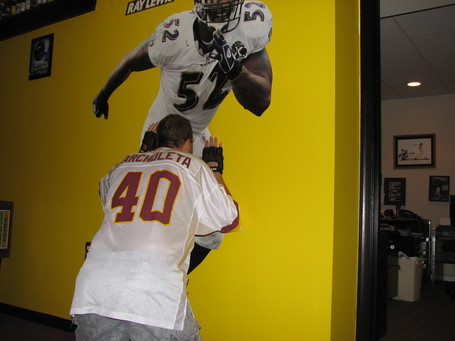