Summing up the Philadelphia Eagles in the 2000s (Flow chart)

Share All sharing options for: Summing up the Philadelphia Eagles in the 2000s (Flow chart)

As we all know, Hogs Haven likes to make fun of people. We've done Romo, our own Vinny Cerrato, and now we direct our attention to the Birds. I'm not trying to one-up our other posts, but I thought this was definitely good enough to fuel some trash talking. I've been saying for years that the Eagles really pooped the bed not giving Donovan McNabb better weapons. I think this flow chart sums it up properly (click to enlarge): 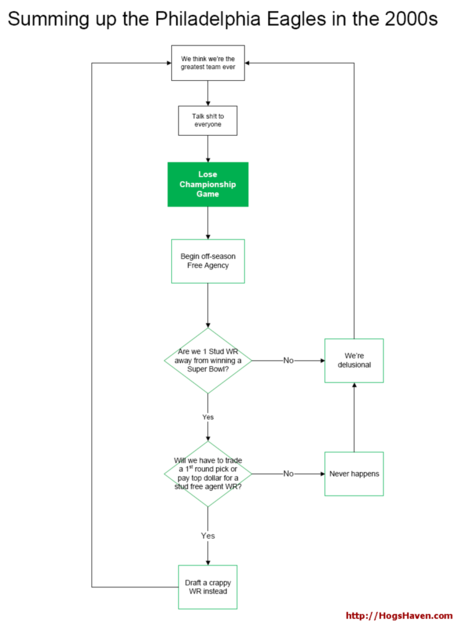 * - Before the Eagles' fans blow up the comments section, let me add a foot note here. I actually sent this flow chart to a great friend of mine last week, who happens to be a season ticket holder for the Eagles. His first reaction was this flow chart is crap because of DeSean Jackson. My response, "Well, follow the line, it ends in another NFC Championship loss." Not only that, DeSean is only one WR. Great teams don't win with one good WR. I of course brought up Todd Stinkston Pinkston and Freddie Mitchell (yes, those 2 WRs on the Super Bowl roster). No rebuttal there. The Eagles had a chance to get Anquan Boldin earlier this year, and they passed instead drafting Jeremy Maclin. My same friend pointed out that no stud WRs have come out of the Big 12 the last ten years, which worries him. Roy Williams certainly has mad skills, but he has yet to really be that big impact player. So yes, DeSean Jackson is a great player, but how good would he be without McNabb?  It doesn't matter. The Eagles have had 7 playoff appearances this decade and of course no Super Bowls. It's pretty safe to say the WR position has been the weak link.