Washington Redskins By The (Jersey) Numbers: #19 - Is Mr. Tupa Available?

In which we inconvenience a punter's father.

Share All sharing options for: Washington Redskins By The (Jersey) Numbers: #19 - Is Mr. Tupa Available?

If Facebook and Gmail gags are the home runs for Hogs Haven, and the By the Numbers articles are the base hits, then the #19 slot is like a hit batsman. It gets us on base, but when you watch the replay, you can see that we make no attempt to get out of the way of the inside fastball. But the show must go on. Here are a few guys who suited up in the #19 jersey for the burgundy and gold:

Chuck Malone: He was a two way player from 1934-1942, making the jump from Boston to Washington where the team changed cities. I feel like I am being disrespectful by acting like I know a lot about this player when I really don't. The name 'Chuck Malone"  is a great football name, though. Sounds tough. I would also have accepted cop, fireman, martial arts instructor, or boxer with a name like that. The two-way combination of positions he played is also note-worthy to me. Receiver and defensive line. Reminds me of backyard football.

Joe Aguire: Another old-school player (early 40's), this guy caught 97 balls from Sammy Baugh in four seasons with the Skins. But he left town to play in another city (L.A.), and ultimately wrapped up his football-playing days in Canada.

Anthony Mix: During that playoff run two years ago, you couldn't talk about our receiver situation without somebody saying, "I think Anthony Mix has a real shot to crack our starting lineup for years to come." Based on what again? Oh yeah, his size and his relationship with Jason Campbell. I will say this for Mix--he made some special teams plays down the stretch that helped us secure wins when we had to have them.

Been a while since the By the Numbers staff pulled an interview for you guys. When you have a guy like Tom Tupa spend some time in burgundy and gold though, you have to go to any length to get the hard-hitting feature interview. Fortunately, we were able to reach Tom Tupa by phone--enjoy. 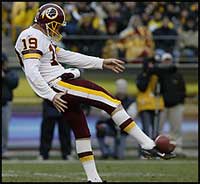 Sugar: May I speak with Tom Tupa?

Sugar: Tom! How are you doing today? My name is Ken Meringolo and I write for a Redskins site and we were hoping we could ask you a few questions about your football career--specifically your time as a Redskin.

Tom Tupa: You got the wrong Tom Tupa. I'm his dad.

Tom Tupa's dad: If you give him a call, leave him a message and I'm sure he'd be happy to answer some of your questions. (this turned out to be patently false; I still have not heard back from our former punter)

Sugar: Hmmmmm...Would it be okay if I ask you a few questions? (I am not exactly Edward Murrow, but I do have a killer instinct when it comes to nailing down an interview. I had a former punter's father on the line. My gut told me this was the best I was going to do.)

Sugar:Mr. Tupa, what was the city you most enjoyed watching your son play in?

Tom Tupa's dad: Well you know, I always liked Boston, where the Patriots played. But when he got down to Tampa, that wasn't hard to like either.

Sugar: As a kid, Tom was pretty good at basketball, baseball, and football. (Tom got deep in the Punt, Pass, and Kick contest, winning it once, was a letterman in basketball and was both a pitcher and shortstop on the high school baseball team.) What sport did you see Tom having the best chance to further his career in?

Sugar: Were you surprised that he got all the way to the NFL as a QB and not as a primary punter?

Tom Tupa's dad: No, no...not surprised at all. Tom was a great athlete.

Sugar: Thanks for your time and we wish you the best.