Share All sharing options for: Daily Slop: I'm Back

So my 2 weeks in the UK were fantastic, I'll post more on that after the jump, including challenging the Redskins QB in a competition, as I am now the World Rubber Chicken Chucking Champion.

- Redskins Fans 1 - Vinny Cerrato 0 [Fanhouse]
(Of course it's way to early to judge, but it certainly is nice to see Sanchez is doing so poorly)

- Rookies compete for best TD celebration [Yahoo]
(Matt Stafford's is pretty good. Why is Orakpo not in this?)

- Bruno sticks his butt in Eminem's face [MTV]
(This is fantastic. Of Course Eminem does not take it well)

- JLC posts resignation letter than rescinds. I'm confused. The RSS feed still had part of his good-bye, but the Insider blog doesn't have it now.

When we kicked this blog off just before the 2006 season, I'm not sure anyone had lofty expectations. I was eager and happy to explore a new forum to try to post breaking news as quickly as possible, share a little bit of myself and, best-case scenario, entertain on occasion. We ended up building a cool little community that became very dear to my heart. Sure, we had some dust-ups from time to time, but Redskins Insider became in some ways an extension of myself, and that the fact that so many of you guys put a little bit of yourselves into it has always blown me away, and always will. Even those who chose to use the comments section to blast me still took the time to write, and the readership, support and friendship so many of you granted me will always stay with me. So it is not...

The first week of my vacation I visited family in Barnard Castle, UK, and the second week I went around Scotland.If anyone has the chance to go to Scotland, NEVER pass it up. Absolutely brilliant on all levels, including partying. I learned about 70% of the movie Braveheart is factually incorrect, so it was good to get my history lesson on that. One of the days visiting the relatives, there was a big festival, including a competition to see who could throw a rubber chicken the furthest. Gary, the town hero and former rugby player, had already set the bar with a massive throw of 89 feet at the top of the hill pictured below. But it was not Gary's day, for I was able to launch a 90 footer. So what comes with this victory? Well, a trophy, bottle of champagne, both of which were awarded to me on stage. I also had my name and victory posted in the UK newspaper and several of the elder ladies in town said "Hey!  It's Chicken man!" as I walked by.  In short, this is no small feat. I still feel quite cocky confident of my win that I would like to put my championship trophy on the line against any of the Redskins' QBs. I can't really see any of the players rushing to do this, but perhaps I can persuade Chase Daniel or Jeff George to accept my challenge. Sugar and I could always call Todd Husak back. 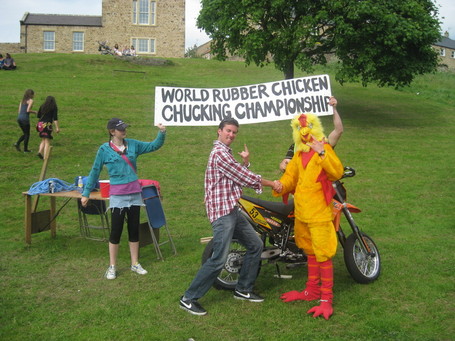 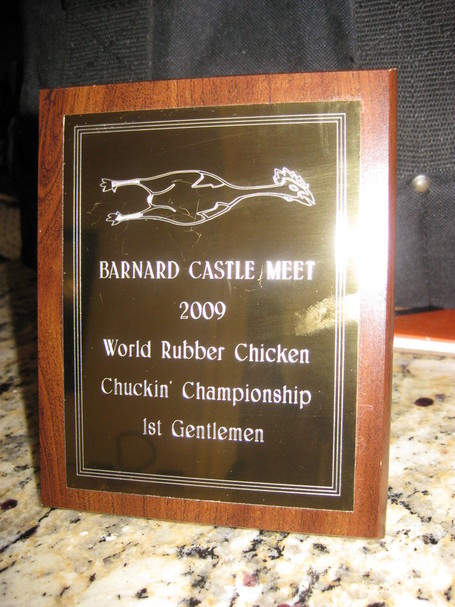