Share All sharing options for: Minicamp Coverage: Observations and Interviews from Redskins Park

Well, Sugar and I have arrived at Redskins Park. It is wet as can be but practice is still on. We're blogging from the media room now adjacent to the main complex. Jason LaCanfora and David Elfin are here. We're about to head out to the field now so we'll keep you posted on the action with this thread.

Update 11:43am - So the day just ended and we got to talk to several players after practice including Heyer, Randy Thomas, Mike Williams, Brian Orakpo, and Renaldo Wynn. Zorn spoke to the media for 5 minutes afterwards. We'll post the full details with audio and pictures tonight. I am still soaking wet at this point and have yet to eat.

Seen and heard on the sidelines in our waterlogged media group: I spoke to Homer McFanboy's Brian Murphy about who has been standing out among the non-roster guys invited to participate in this session. Kelley Washington was mentioned by all as a guy who has been standing out, perhaps even as a guy who could finally unseat James Thrash on this roster. We shall see. JLC and I spoke about James Thrash also, as I wondered aloud if Justin Tryon would make this team, and if his spot would come down to a choice between him and Thrash. Matt Terl (Redskins blogger) is the man by the way. He doesn't big-time anyone, and he was one of the more soaked individuals on the sidelines this morning.

As for the actual practice, who did I see that stood out: No doubt...it was Fred Davis. I swear it seemed like he was a man among boys out there on some plays. He caught everything I saw thrown his way, and he worked with the first-teamers in 11-on-11 drills. If we can get him and Cooley on the field together in the red zone, I just don't know who is built to stop that kind of firepower. Kevin Barnes, our new rookie corner, did not look that great in a few one-on-one matchups. He seemed to be getting burned by some no-name guys too. Ultimately, you would expect a guy in his spot to open rough I guess, but it was probably not one of his finer days in cleats.

I was looking for Colt and in 11-on-11 drills he delivered two sidearmed throws in a row, to the ground. He made some other good throws underneath, but I wonder what the coaches think about his delivery. When Zorn was asked about Colt later, he said he had a "MUCH stronger arm already than last year," and indicated that last year at this time, he was still dealing with the labrum injury, so he is much farther now than he was last season. 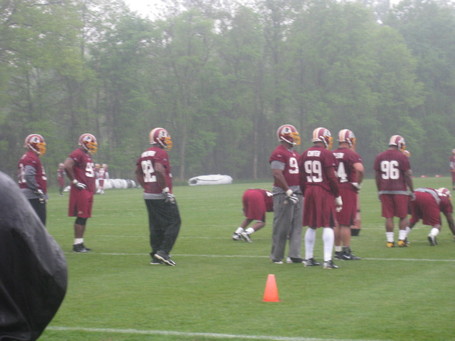 Coach Zorn also said that he liked the flash that Robert Henson showed today and this weekend (Henson is an early Hogs Haven favorite). Otherwise, he said the veterans are much farther along in general this time around in his second year and that the coaches seemed a little more comfortable, too.

We had a chance to get some facetime with a few players, and here are some of the things we got from them:

Andre Carter, on playing linebacker: "Been there, done that..." Didn't sound like he was going to be volunteering for any snaps at LB anytime soon.

Randy Thomas, on Jason Campbell's offseason saga and how he has handled it: "Stayed poised. You would never know anything was going on. Not one time was I thinking someone else was the quarterback. That's all media talk. "

Randy Thomas, on the age of the offensive line: "They say we're old. They will keep saying it until we win a ring. We've been together for a while...we were old when we were 28. We gonna stay old until we win a championship."

Mike Williams, on what he missed most about being out of football. "Competition. I'm a competitive guy." He did not look 400 lbs...I'll be honest, he was working hard and he looked like a tank.

I think the other real notable event of the day was a play in which Fred Smoot, in NO pads, laid out Marques Hagans. They were both going for the ball and I think Hagans even caught it, but Smoot knocked him down pretty hard. From the other side of the field, we could all hear Smoot hooting and howling, as he made his way back to the defensive huddle.

Coach Zorn said Devin Thomas' hamstring injury is nothing to worry about, and he'll be fine.

Just to continue on the Colt topic, Zorn added that he still has a decent amount of learning to do with the playbook/system. JC was definitely the most accurate passer out there today, which without doubt quells any "start Colt now" feelings.

Fred Davis did stand out, and Coach Zorn was all giddy about him in the post-practice interviews. I asked Zorn about Jansen, and he said positive things mentioning how they worked him out as Center today, which David Elfin covered. I have the impression that Heyer will win the competition; however, I asked Zorn this direct question and he humbled me replying that the competition does not begin until they get into pads and can really compete. Makes sense.

We talked to Stephon Heyer after practice, and he was confident he would be a major contributor this year. I asked him specifically how is the offensive line going to improve when the Redskins are basically fielding the same guys as last year (who gave up the 10th most sacks)? He replied that they need to focus on their technique and running plays that benefit their strengths.

Multiple people were talking about how great shape Phillip Daniels is in. You can tell by this picture (next to Andre Carter) he is the biggest guy out there. The roster we received has him listed as 6'4" 276 lbs, which is definitely not accurate since Albert is listed as 6'6" 320 lbs. (Phillip is clearly taller than Albert). If I had to guess now, the Skins' starting front four will be Phillip, Andre, Hanyesworth, and Griffin. Very impressive. Orakpo when we talked to him said he's already learning a lot from London. He's worked all minicamp with the LB crew so his role is becoming clearer. Orakpo is listed on the roster as 6'4 which isn't accurate either. I'm 6'2 and he was the same height as me at most. His build isn't suited for a full-time DE, so the Skins are going about this the best way I feel.

Another player that stood out was Domnique Dorsey, the RB the Redskins signed from the CFL. He showed great hands and in multiple plays showed a stellar burst through the secondary. Sellers and Rock also were showing good hands in the bad weather.

Mike Williams is absolutely a guy you want to root for. I tried to get out of him what his exact diet is, but he wouldn't go into specifics. The most important thing was eating at the right times (ie - no late night snacks). Kelli Johnson asked about Mike Williams, and Coach Zorn replied that he was working by himself today on the sleds. Zorn drew a laugh stating, "We were doing our things on the field when we heard this really loud noise coming from his area...he was crushing the sled." A handful of players hit the weight room after practice, and Mike Williams was one of them.

Randy Thomas is another great personality. I asked him multiple questions on how much JC audibles, and I did not get much of a direct answer. From what I gathered, for the most part, the play comes in and they run it.

The kickers did not work out at all really given the pourous conditions. When I looked over to their side of the field, this is what I saw: 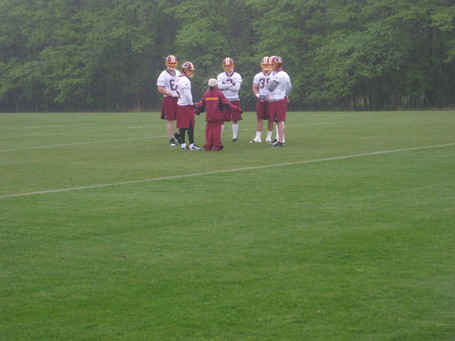 I could not stop laughing at this view. I was like, "Who is this midget coach?" Turns out it is Coach Danny Smith's kid, who got some field time today. Look how all the players are so focused on whatever he's saying! Good times.

As Sugar mentioned, the media folks that have been in camp all weekend were impressed with Kelly Washington. The Skins offered him a contract, but he is going to wait until after the Ravens camp hoping to get a better offer. The Washington Times found this fantastic TD celebration he did as a Bungle.